Outstanding book about the battle of Pea Ridge 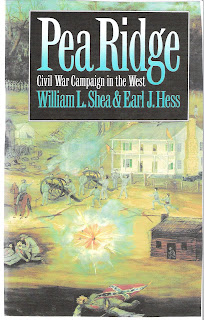 Dr. Shea and Dr. Hess walked the battlefield many times; this familiarity with the battlefield’s terrain adds much to their analysis. They focus on Earl Van Dorn, a flamboyant soldier with few organizational skills; he led his Confederate army to disaster. By sharp contrast, his opponent was Samuel Ryan Curtis, a reserved, older gentleman who had all the organizational skills that Van Dorn lacked. Although the book’s treatment of the events leading up to the battle and the battle itself are extremely well done, my attention was most caught by the section that details what happened after the battle. Curtis’s army battled the elements and the terrain to march 500 miles to , in a little more than three months. Much of Van Dorn’s army crossed the and went on to fight in campaigns in the western theater.

The Pea Ridge campaign is quite a story, and this book does full justice to its importance. Check it out.

NOTE: William L. Shea’s book Fields of Blood: The Prairie Grove Campaign will be published by the this fall. The release date, according to the ’ website, is November 2009. I am counting down the days to publication!

Posted by Jane Johansson at 9:37 AM