An Unfortunate Soldier of the Fourth Iowa Cavalry

One of my favorite regimental histories by a veteran is William Forse Scott’s The Story of a Cavalry Regiment: The Career Of The Fourth Iowa Veteran Volunteers, From Kansas To Georgia, 1861-1865 (1893). Scott’s book is mostly a serious recounting of his regiment’s many campaigns, but some amusing soldier stories are included as well.

On October 11, 1862, about fifty men detached from companies A, G, and H were attacked by the 21st Texas Cavalry just a few miles from Helena, Arkansas. Routed by the Texans, the detachment lost four killed, six wounded, and fifteen captured. Scott dutifully narrates the skirmish but then wrote, “Some amusing incidents are told of the rout…” (p. 53).

One of the soldiers who escaped capture “was a short, stout man, his form presenting several great projections. When he lost his horse he went lumbering down the lane afoot, while the rebels were engaged with the others behind him, till he came to a gutter or culvert across the road. It was covered by a couple of planks, laid the length of the gutter and supported by short cross-pieces under the ends, so that by the weight of horses or wagons they were bent down in the middle. The frightened fugitive no sooner saw the hole under the planks than he thought it a good place for hiding, and crawled in. But the space was shallow for a man of his thickness, and while his front was on the ground his rear was against the planks. Hardly had he got into position when the rebels came galloping down the lane in pursuit. They rode over the little bridge with a clatter that must have seemed to him endless, and every horse struck the planks with a thump upon the protuberant portions of his body. There was no turning around, there was no getting out, unless to be killed or captured. Each thump was worse than the one before, but at last, when he thought he was nearly dead, the riding ceased, and he tried to recover his breath. But then, driven by Parsons’ charge, many of the rebels rode back again, and pounded more trouble into the unhappy fellow. His torture seemed endless, but the time did come when the fighting was all over….Night came at last, to the relief of his mind, if not of his body, and the jellied trooper crawled out and lay in the weeds, in a field near by, until morning….The sufferer found each inch of his flesh more tender than any other, and when he was discovered and helped to camp, it appeared to his rescuers, as well as to himself, that he had borne the brunt of the battle” (pp. 54-55).
Posted by Jane Johansson at 6:48 PM No comments:

About three weeks ago, I went on a day trip to Fayetteville and visited the National Cemetery there. First established in 1867 with internments of Union soldiers from the battlefields at Pea Ridge and Prairie Grove, it is a beautiful and well-maintained cemetery. The Civil War burials are on the top of the hill, but soldiers from later wars are intermingled with their earlier counterparts. While studying the inscriptions, I took a photo of the grave marker of 4th Sergeant Lindsey E. Teal and later discovered a story of heroism.

Sergeant Teal enlisted in St. Croix Falls, Wisconsin, in a unit that became Company A of the 20th Wisconsin Infantry. The regiment’s highest casualties occurred at the battle of Prairie Grove on December 7, 1862. These Wisconsin soldiers entered the battle after an epic march of 120 miles over three and a half days. They were among the regiments that made piecemeal attacks up a ridge toward the Borden House; the specific target of the 20th Wisconsin were the three guns of Captain William D. Blocher’s Arkansas Battery near the house. William L. Shea describes what happened next in his Fields of Blood: The Prairie Grove Campaign:

[Major Henry A.] “Starr bellowed ‘Forward!’ and the Twentieth Wisconsin dashed toward the Rebel guns. ‘We rushed over a rail fence and the battery was ours,’ wrote Captain Miller. ‘What a shout of exultation arose!’ Color Sergeant Lindsey E. Teal climbed onto one of the guns and exuberantly waved the Stars and Stripes. The ‘whole command was wild with excitement,’ noted a Wisconsin soldier. ‘We thought we could clear up the whole business at once,’ recalled another. A quick check revealed that not a man in the regiment had been hurt” (page 170). The regiment advanced on and part entered a ravine where they were mauled by Confederate troops. By the end of the battle, the 20th Wisconsin had suffered a 49% casualty rate. Among the fifty men killed in action was Color Sergeant Lindsey Teal. 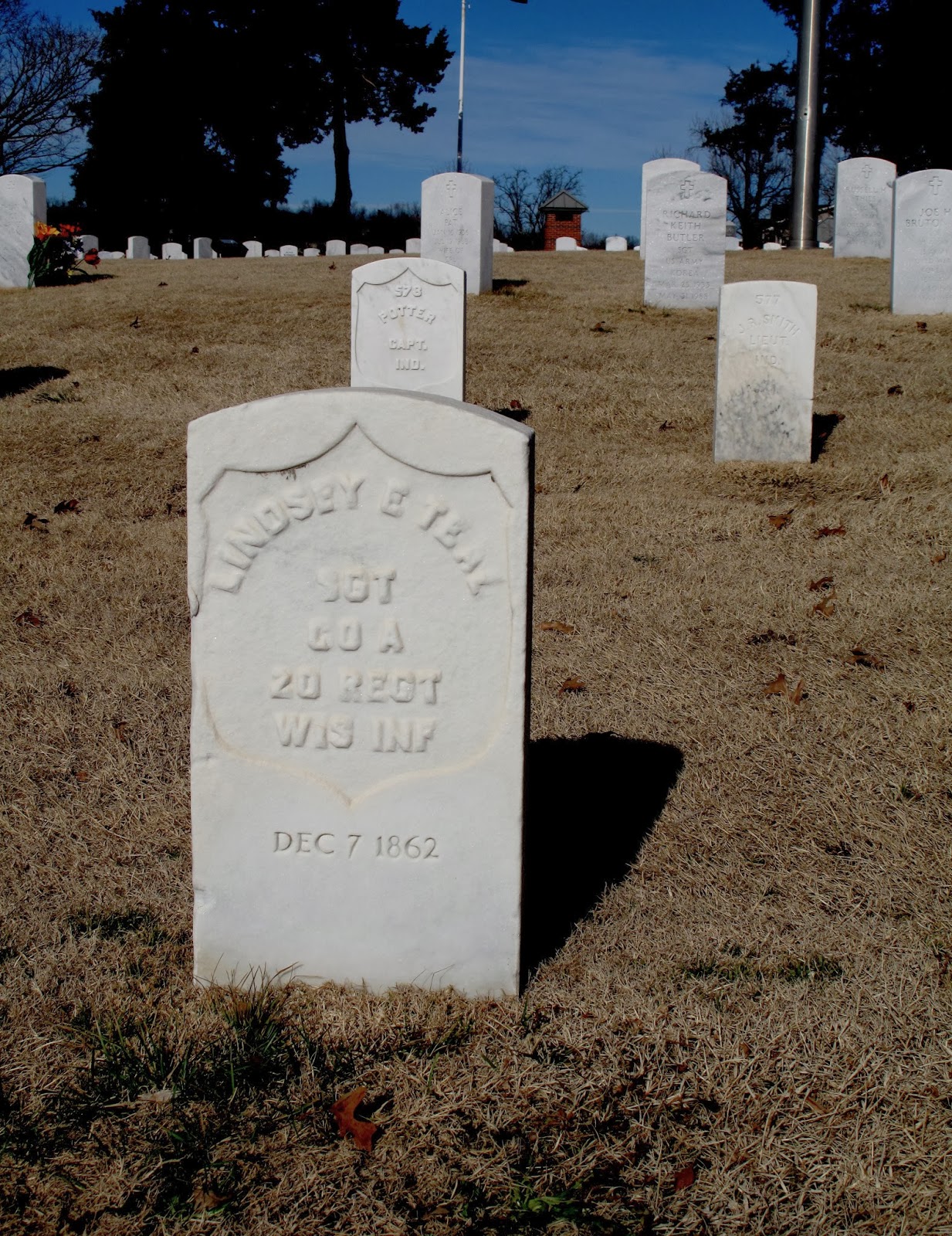 Posted by Jane Johansson at 4:35 PM No comments:

A Classic from My Bookshelf

Several times a week, I like to pull a book from my shelves that I haven’t looked at in a long time. Maybe it’s geekish, but I like to become reacquainted with my books. Yesterday, I opened my Camp Pope Bookshop reprint of Reminiscences of the 22nd Iowa Infantry by Lieutenant Samuel Calvin Jones. Admittedly, I am rather sentimental about this book because it was one of the first soldier accounts of the war that I ever read. The University library in the town where I grew up allowed me as a non-student to check out books including bound copies of the original Confederate Veteran, first editions of Confederate soldier accounts, and even a first edition copy of Reminiscences of the 22nd Iowa Infantry.

Jones’ slender volume is appealing because it is based on his diary, written in a straightforward fashion, and chronicles a regiment that served in all three theaters of the war. The 22nd Iowa Infantry was one of Fox’s “300 Fighting Regiments” and was featured earlier in this blog. Jones’ discussed service in Missouri and then his involvement in the Vicksburg campaign where his Iowa regiment suffered severe losses during the May 22nd assault. Later in the war, the regiment was one of three Iowa units that served in the 1864 Shenandoah Valley campaign.

Here is a brief sampling about a mud march in Missouri on this date in 1862:

“February 8th. We leave West Plains. We take up our march going northeast on the Thomasville road, a very muddy one. Marched ten miles and go into camp for the night.
We start out on our march early this morning. The wagon trains and artillery started out earlier than we did. We found wagons and artillery stuck in the mud, some of the wagons abandoned. The moving of the trains and artillery was almost an impossibility. There was much wrath and confusion. We had it to do and we tried to make the best of it. We reached Thomasville at 3 p. m. Our teams did not come in till ten p. m. We could get nothing to eat until they came, therefore, we got our supper about eleven o’clock.
We went into camp here on the banks of Eleven Point river” (pages 18-19).
Posted by Jane Johansson at 7:11 PM No comments:

By contrast to the rather small number of trans-Mississippi units in the Union army at the battle of Chickamauga, there was a strong contingent of Confederate troops from west of the Mississippi. The following list is drawn from the Official Records.