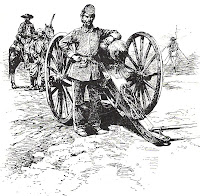 According to Ralph A. Wooster, the author of Lone Star Regiments In Gray (: Eakin Press, 2002), only one battery saw “extensive service east of the ,” (p. 293). The Good-Douglas Texas Battery, composed of men from and , was first commanded by Captain John J. Good, an attorney from . The battery first “saw the elephant” at the battle of Pea Ridge, but after that campaign, the battery crossed the Mississippi River where it served near Corinth, Mississippi, and then it joined the Army of Tennessee in its invasion of Kentucky. Thereafter, the battery’s fate was tied to that of the Army of Tennessee, and it served in all of the major campaigns of that force.

I’ve long considered writing a history of this battery. However, sometimes a modern work does not surpass an older one, or in the case of the Good-Douglas Texas Battery, two older works. Lester Newton Fitzhugh edited Cannon Smoke: the Letters of Captain John J. Good, Good-Douglas Texas Battery, CSA, a book published by in 1971. This well edited volume reproduces the correspondence of Captain Good and his wife, Susan, from April 1861 to May 1862 when Captain Good resigned his commission. Appendices include several rosters of the battery. In 1966, the Smith County Historical Society of Tyler, Texas, published Douglas’s , CSA, edited and compiled by Lucia Rutherford Douglas. The correspondence of

Captain James P. Douglas, the second (and last) commander of the battery, and his wife, Sallie, are contained in this book. Additionally the book contains the diary of Private Sam Thompson, the 1864 diary of Captain Douglas, a short sketch of the battery by Private James Lunsford, and two rosters. Although this volume is not as extensively edited as Cannon Smoke, it provides a valuable look at this fighting unit throughout the war. When you take into account that few additional primary sources have surfaced on the unit, it seems that a modern history of the unit would add little of significance. Sometimes older is better.

“Though other corps made marches during the campaign which may have been equally grueling, the circumstances attending that of the Sixth Corps made it famous. The word came that they were needed, and needed in a hurry, so they marched from ten at night until five the next afternoon with only a few breaks for coffee or now and then a short rest. On and on they trudged, endlessly it seemed, at first through darkness and then in the glare of the July sun, thirty-four long miles to ” (p. 357). So wrote Edwin F. Coddington in his classic book, The Gettysburg Campaign, published in 1968. Fortunately for the men of the Sixth Corps, they saw only light combat during the battle itself.

And yet, the soldiers in the trans-Mississippi were involved in many marching feats that were more impressive than those performed by their eastern counterparts, even including the marching of Jackson’s famed “foot cavalry” during the 1862 Shenandoah Valley campaign.

William L. Shea documents the most famous trans-Mississippi example in Fields of Blood: The Prairie Grove Campaign: “Between the afternoon of 3 December and the morning of 7 December, a period of three and a half days, the Second and Third Divisions of the Army of the Frontier marched 105 and 120 miles respectively and went directly into battle at Prairie Grove. The actual distance varied from regiment to regiment, but the entire command averaged over thirty miles per day on primitive frontier roads in bitterly cold weather with only brief halts for food and rest” (p. 128).

There was also the impressive, well-organized trek of the column in 1862 from (, ) to . The soldiers averaged “about twenty miles a day” during this march of “nearly six hundred miles” (p. 43) across the desert, according to Andrew E. Masich in The Civil War In : The Story Of The Volunteers, 1861-1865.

The Confederates could also point to an extraordinary feat of marching by ’s Texas Division (’s Greyhounds) and fighting at the battles of , , and Jenkins’ Ferry during the Red River campaign. Richard Lowe in Walker’s Texas Division C.S.A.: Greyhounds Of The Trans-Mississippi states “In seventy days they had marched, often without food or tents, about 930 miles and fought three pitched battles. This was the equivalent, roughly speaking, of a Federal army marching from , , to , and fighting along the way, all in ten weeks. It was one of the more amazing physical feats of the American Civil War” (p. 232).

Many of you are already aware of this, but Dr. Arthur “Art” W. Bergeron, Jr. passed away on February 8, 2010. I never met Art personally, but I exchanged periodic emails with him over several years. Art researched and wrote extensively on the Civil War, with a particular concentration on and its soldiers as well as other trans-Mississippi related topics. My favorite among his books was one I used extensively when I researched the Adams-Gibson Louisiana brigade. Guide To Louisiana Confederate Military Units, 1861-1865 (Baton Rouge: Louisiana State University Press, 1989) contains short histories, bibliographies, and lists of officers for essentially all of the units provided by the to the Confederate cause. There is also a helpful “Note on Sources” at the back of the book that details important monographs and manuscript sources on these troops. Fans of Dr. Bergeron know that he edited a number of primary sources including one of my favorites, The Civil War Reminiscences Of Major Silas T. Grisamore, C. S. A. (Baton Rouge: Louisiana State University

Press, 1993). Major Grisamore’s lively account documents his service in the 18th Louisiana Infantry and his work as a quartermaster in the trans-Mississippi through much of the conflict. Art also wrote many journal articles over the years such as “The Yellow Jackets: The 10th Louisiana Infantry Battalion” that appeared in the now defunct Civil War Regiments: A Journal Of The American Civil War. This article documents the history of a rather unreliable trans-Mississippi regiment.

Besides his scholarship, Art spent much time aiding other historians. When he learned that I was researching the history of the Adams-Gibson Louisiana brigade, he periodically sent me information about pertinent primary sources and other research leads. In our last exchange a few months ago, we discussed a series of photographs that may or may not depict Brigadier General Daniel W. Adams. When I decided to drop my project on the Adams-Gibson Louisiana brigade because another scholar had submitted a manuscript on the topic, I consulted with Art about other potential research projects. He gave me straightforward and honest advice of what he thought about my ideas (there was one he did not care for too much!).

Art, you will be missed by many.

Determining the Value of a Military Unit

How do you measure the true worth of a Civil War unit? One of my favorite Civil War books is Regimental Losses in The American Civil War, 1861-1865 written by Union veteran William F. Fox in 1898. The bulk of the book is devoted to Fox’s “Three Hundred Fighting Regiments,” the Union units “that sustained the heaviest losses in battle” (p. 122). However, Fox had a caveat about this list when he stated, “It may be suggested that large casualty lists are not necessarily indicative of the fighting qualities of a regiment; that on many occasions regiments have rendered valuable service and achieved a brilliant success with but slight loss” (p. 122). It is certainly true that the heavy losses of a particular unit may have had little to do with their “fighting qualities” and instead may be more indicative of “bad luck” or even poor leadership. I suspect you can readily come up with a list of regiments that suffered heavy losses because they were simply in that wrong place at the wrong time.

So, which regiments in the trans-Mississippi “rendered valuable service and achieved a brilliant success with but slight loss”? And on a related topic was it possible for a regiment to have great success with either little or no loss of life due to battle? After reading Andrew E. Masich’s The Civil War In : The Story Of The Volunteers, 1861-1865 (: of , 2006) I would like to nominate the units that he chronicled for their impact on an entire region. Masich notes that these units suffered few combat casualties but summarizes their impact by stating: “Besides blazing trails, developing roads, and making maps, army supply contracts for forts along the Colorado River and isolated interior posts bolstered the economy of the fledgling [] territory. The military occupation also kept criminals and Apache raiders at bay, encouraging settlement and resulting in a population boom during the war years. Both officers and enlisted men publicized the territory’s mineral wealth as well as its climate, geography, and cultures. The Californians took an active role in the establishment of the new territory, and many would return after their military service to settle and further shape Arizona’s future” (p. 112). As an aside, in spite of the value of their service, these California units are not mentioned at all in Colonel Fox's book.