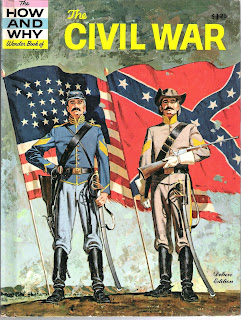 Classes started at on 13 August, and I’ve had a busy time since then. Our enrollment has increased significantly, and this is quite evident in three of my four classes. Perhaps the start of school has caused me to take a trip down memory lane and recall some of the first Civil War books that I read. The very first Civil War book that I remember reading with any seriousness was The How and Why Wonder Book of The Civil War. It is a slender volume with few references to the Trans-Mississippi; among those is mention of the German population in , “bloody ,” gold mining in and , and the uprising by the Sioux Indians in . I suppose that is not too bad for a 48 page book! 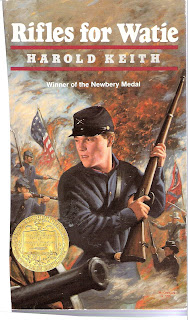 After reading The How and Why Book of the Civil War, I recall reading some books about the eastern theater aimed at young adults. After a heavy dose of reading books about Gettysburg and Robert E. Lee, imagine my surprise when I found a historical novel about the war in the Trans-Mississippi sitting on the bookshelves at home. Acquired by my older brothers, Rifles for Watie by Harold Keith was a revelation to me. Winner of the 1958 Newbery Award for children’s literature, Keith’s book traces the adventures of Jeff Bussey, a teenage soldier from . Private Bussey is involved in the ’s Creek campaign and the battle of Prairie Grove. He travels through the and as a spy rides with Stand Watie’s men for a time. Not only was the plot exciting to me as a child, but I also learned that significant Civil War actions occurred in the Trans-Mississippi.

Born in in 1903, Harold Verne Keith earned a bachelor’s degree and a master’s degree from the . To research the background for this book he read standards accounts about the war in the Trans-Mississippi; he also used interviews from an earlier research project of 22 Confederate veterans who lived in and . In addition to writing a number of books mostly for young adults, Mr. Keith also worked as the Sports Publicity Director for the University of Oklahoma from 1930-1969. He died in , in 1998. Was there a particular book that triggered your interest in the Trans-Mississippi?

Posted by Jane Johansson at 2:50 PM