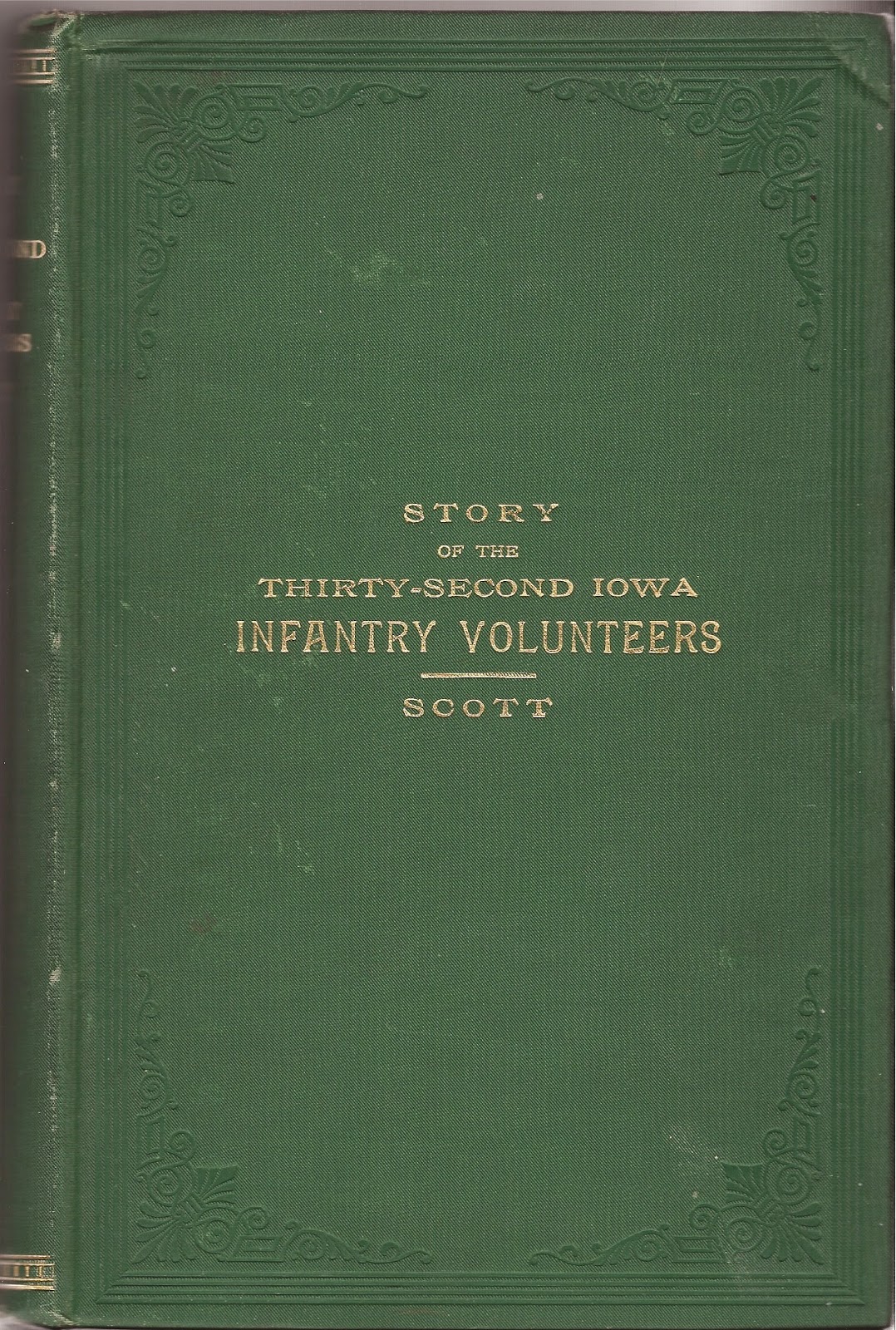 So which opinion do I agree with? The winner is Dr. Ludwell H. Johnson in this instance. Most of Dr. Robertson’s evaluations in Civil War Books are reasonable to me, but his evaluation of the Scott book is puzzling. Yes, Scott’s book does include excerpts from the Official Records as did many regimental histories written by veterans. However, Scott’s inclusion of eyewitnessaccounts of the regiment’s campaigns makes his book particularly valuable to historians. Altogether Scott devoted 158 pages of his 526-page book to coverage of the Red River campaign. This is appropriate since the 32nd Iowa Infantry served actively in the campaign, and lost 86 men killed or mortally wounded at the battle of Pleasant Hill. Scott’s book is anything but “a poor effort toward a history.”
Posted by Jane Johansson at 4:18 PM 4 comments:

Research is a mixed bag. Sometimes, books turn out to yield unexpected jewels, and sometimes books turn out to be disappointing. It’s probably not fair to label a book as disappointing because its contents may be invaluable to a historian working on a different project. Also, historians shouldn't judge a book based on what they wished the author had covered. In spite of all that, though, I am disappointed by a source, namely Wiley Britton’s, The Union Indian Brigade In The Civil War (1922). Britton, a veteran of the 6th Kansas Cavalry, penned two other works: The Civil War on the Border in two volumes and his own Memoirs of the Rebellion on the Border: 1863. Authors regularly cite Britton’s books, although his influence seems to be declining somewhat as more modern books are published about the Border War.

Britton often observed the Union Indian brigade that consisted of the 1st, 2nd, and 3rd Indian Home Guard regiments, and his personal comments about these soldiers are sprinkled throughout the unit history. The frustrating part to me, though, is that his history could have been much more valuable. A top-notch unit history draws on letters, diaries, recollections, official documents, and other sources that relate directly to the soldiers in that unit. What is lacking in Britton’s history is the perspective of men who actually served in the brigade. To be fair, many of the veterans had died by the time Britton's book was published in 1922. If only Britton had worked earlier on securing letters, recollections, and other documentation from the Indians, African-Americans, and white soldiers that served in the brigade! That would have resulted in an amazing resource about one of the most unique brigades in the Union army. We are fortunate to have the resources that we do about the War, but sometimes you just can’t help but think about what could have been.
Posted by Jane Johansson at 3:34 PM No comments:

No doubt you’ve read about different methods for improving morale during the war such as the development of corps badges, better rations, flags, etc. Today, I read about how an artillery demonstration boosted morale.

The Place: Leroy, Kansas
The Time: mid-June 1862
Context: An expedition is being organized to return “loyal” Indian refugees to the Indian Territory. Most of these Unionist Indians were from the Cherokee, Creek, and Seminole tribes. This venture was labeled as the First Indian Expedition, and the troops involved included the First Indian Home Guards, the Second Indian Home Guards, plus units from Kansas and Wisconsin.
Eyewitness: Indian Agent W. G. Coffin described the event to the Commissioner of Indian Affairs, William P. Dole.

Coffin reported that after much effort, Captain Norman Allen’s Kansas Battery finally agreed to visit Leroy, Kansas. There, the battery gave a demonstration before “nearly two thousand Indians….[it] was received by the Indians with entire satisfaction and applause, it has made a grand impression upon them and has also strengthened their confidence in the success of the expedition….I doubt very much whether those Indians could have been induced to go at all had it not been for that Battery going along with them….”

A great day is when new books arrive in the mail. Today, I received I Do Wish This Cruel War Was Over: First Person Accounts of Civil War Arkansas from the Arkansas Historical Quarterly, edited by Mark K. Christ and Patrick G. Williams and "This Day We Marched Again: A Union Soldier's Account of War in Arkansas and the Trans-Mississippi edited by Mark K. Christ. The latter is an account written by Jacob Haas, a soldier in the 9th Wisconsin Infantry, a regiment that campaigned solely in the trans-Mississippi. Drew Wagonhoffer has written detailed (and positive) reviews of both books on his blog, Civil War Books and Authors. It is good news indeed to have more trans-Mississippi primary accounts readily available.

Posted by Jane Johansson at 4:39 PM No comments:

Newspapers are one of my favorite sources, and I’ve enjoyed reading through the wartime issues of the Daily Conservative published in Leavenworth, Kansas. Press stories of the time were often spicy affairs laced with drama and decided opinions. James G. Blunt became one of the most prominent Union generals in the trans-Mississippi, but the Daily Conservative was initially unimpressed with his appointment as brigadier general. An April 12, 1862, article labeled him as “totally unqualified” and went on to state that “scores of our officers are the military and intellectual superiors of Blunt. Any one of them has more personal popularity, more force of mind than Blunt.” In a mysterious change of heart, though, the editors changed course and announced less than a month later that they were pleased with his appointment as commander of the Department of Kansas. Subsequent articles lauded and praised Blunt, the former “totally unqualified” general.
Posted by Jane Johansson at 2:29 PM No comments: