Recently, I have been perusing the marvelous The Butterfield Overland Mail, 1857-1869, a three-volume work by Roscoe P. Conkling and Margaret B. Conkling. Published in 1947, the books were the culmination of years of research and fieldwork by the authors. The amazing couple retraced many of the Butterfield trail routes in their seven passenger 1930 Buick—what an adventure that must have been!

John Butterfield, a veteran stagecoach line operator (and one of the founders of the American Express company), conceived of the idea of creating a stagecoach line from St. Louis to California. The line began operating in 1857 but was disrupted by the Civil War.

A passage from volume one of The Butterfield Overland Mail describes Mr. Butterfield’s dress and gives some insight into the southern mindset in the late 1850s.

“He was scrupulous in his dress and appearance, his clothes being of the finest quality, and his high hats the best procurable. He adhered to the fashion of many of his time in always wearing high leather boots with his pantaloons drawn down over the tops; patent leather for formal wear, and plain black for business. His appearance in a long yellow linen ‘duster,’ and flat-crowned ‘wide-awake’ hat on his head of heavy graying hair, the attire he adopted on his western journeys, resulted in gaining more publicity than he realized, for he set a fashion for the young men in many of the large communities in Missouri and Arkansas, where the windows of every general merchandise store from Warsaw to Fort Smith, displayed the latest in Butterfield coats, hats and boots, and even Butterfield shirts and cravats” (p. 35).

The passage is so well written that I could easily visualize Mr. Butterfield’s appearance, however, it struck me as intriguing that this trendsetter was not only a New Yorker but also a member of the Republican Party. In fact, he had been elected in 1856 as the mayor of Utica, New York. Mr. Butterfield was heartily welcomed by trans-Mississippi southerners in the late 1850s, and, yet, by the summer of 1860 many northerners were viewed with suspicion. The environment became so hostile that some northerners moved out of the trans-Mississippi South. An interesting study of the southern mindset on the eve of secession is Texas Terror: The Slave Insurrection Panic of 1860 and The Secession Of The Lower South by Donald E. Reynolds.
Posted by Jane Johansson at 8:40 PM 2 comments: 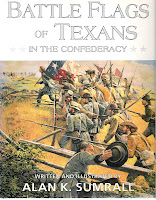 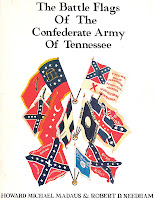 It has been several years since I highlighted trans-Mississippi Confederate battle flags, and I thought this would be a good time to revisit the topic. Since my last posting on the topic there have been no major publications on the subject, so I’ll revisit some old favorites. The Battle Flags Of The Confederate Army of Tennessee by Howard Michael Madaus and Robert D. Needham (1976) is a classic that discusses a number of flags from trans-Mississippi States, however, it is a scarce item and will set you back several hundred dollars if you locate a copy. Alan K. Sumrall’s Battle Flags of Texans In The Confederacy (1995) is the most important book on its topic, and is full of color illustrations by the author. Glenn Dedmondt’s The Flags of Civil War Arkansas (2009) and The Flags of Civil War Missouri (2009) are informative and still easy to acquire.

In addition to books, the following websites are also useful:

Confederate Memorial Hall: I’m hoping to visit this museum some day in part because they have 140 Civil War flags in their collection. Images of six of these flags are on their website.

Missouri State Museum: Their website includes photographs of Civil War battle flags in their collection and links to information about conservation, including a three-minute video.

Old State House Museum: The next time I trek to Little Rock, Arkansas, I’m planning to visit this museum.  Many photographs of Civil War flags from their collection are on the website, and there is a link to a video by Greg Biggs.

Texas Division UnitedDaughters of the Confederacy: This group owns a number of Civil War flags, and a complete list of their holdings are on their website. Some of the flags are on display at the Texas Civil War Museum in Fort Worth.
Posted by Jane Johansson at 11:26 AM 4 comments:

The Honey Springs battlefield near Checotah, Oklahoma, has been designated a National Historic Landmark by the Department of the Interior. The Oklahoma Historical Society operates the park, and visitors may take a driving tour and walking tours on its 1,100 acres. The largest battle fought in the Indian Territory, it was unusual because of the presence of white troops, African-American soldiers, and Indian troops. The 150th anniversary of the battle will be on July 17th. You may read more about the park and the battle in the forty-six page nomination of the park for National Historic Landmark status.
Posted by Jane Johansson at 7:56 PM 1 comment:

Those of you who are naval enthusiasts have already recognized the meaning of No. 290. John Laird, Son and Company’s 290th vessel became better known as the CSS Alabama, the famed Confederate commerce raider. The most recent issue of The Civil War Monitor features “13 Minutes,” a fine article about the clash between the CSS Alabama and the USS Hatteras. Co-authored by Andrew W. Hall and Edward T. Cotham, Jr., the well-illustrated article details the fight and explains the significance of this brief sea battle that took place just thirty miles from Galveston, Texas. An article sidebar also discusses the discovery of the wreck of the USS Hatteras.

After reading the article, I pulled out my abridged copy of Memoirs Of Service Afloat During The War Between The States by Admiral Raphael Semmes, the commander of the CSS Alabama. Here is a portion of his description of the Hatteras-Alabama fight:

“The night was clear. There was no moon, but sufficient starlight to enable the two ships to see each other quite distinctly at the distance of half a mile or more, and a state of the atmosphere highly favorable to the conduct of sound. The wind besides, was blowing the direction of the enemy’s fleet. As a matter of course, our guns awakened the echoes of the coast, far and near, announcing very distinctly to the Federal Admiral—Bell, a Southern man who had gone over to the enemy—that the ship which he had sent out to chase the strange sail had a fight on her hands…Our broadside was returned instantly; the enemy, like ourselves, having been on his guard with his men standing at their guns. The two ships, when the action commenced, had swerved in such a way that they were now heading in the same direction—the Alabama fighting her starboard-broadside, and her antagonist her port-broadside. Each ship, as she delivered her broadside, put herself under steam, and the action became a running fight in parallel lines, or nearly so, the ships now nearing and now separating a little from each other. My men handled their pieces with great spirit and commendable coolness, and the action was sharp and exciting while it lasted; which, however, was not very long, for in just thirteen minutes after firing the first gun, the enemy hoisted a light and fired an off-gun as a signal that he had been beaten….When the captain of the beaten ship came on board to surrender his sword to me, I learned that I had been engaged with the United States steamer Hatteras, Captain Blake…” The Hatteras sank and the next day “one of the [enemy] steamers was returning to her anchorage off Galveston…[and] fell in with the sunken Hatteras, the tops of whose royal masts were just above water, and from the main of which, the pennant—the night pennant, for the action was fought at night…was observed to be flying.”
Posted by Jane Johansson at 7:41 PM No comments:

I have missed working on my blog but have been unavoidably detained by some special work assignments. Recently, Ohio University Press started publishing “The Civil War In The Great Interior” sourcebook series. The title of the series is based on the phrase, “the great interior region,” used by President Abraham Lincoln in his 1862 Annual Message to Congress. According to the publisher, this region included “the states of Ohio, Indiana, Michigan, Wisconsin, Illinois, Missouri, Kansas, Iowa, Minnesota, and Kentucky; the area that would become West Virginia; and parts of Tennessee and the Dakota, Nebraska, and Colorado territories” (p. xi). So far, the volumes on Ohio, Missouri, Indiana, and Kansas have been published. Intrigued by this concept, I ordered Kansas’s War: The Civil War in Documents edited by Pearl T. Ponce. This surprisingly low cost book contains an array of primary sources written by civilians, politicians, and soldiers. Although a few documents are drawn from the Official Records, many have never been published before. The editor has included transcriptions of documents from the Abraham Lincoln Papers, the Kansas State Historical Society, contemporary newspapers, as well as other resources. Divided into chapters with short introductions that set the context, this is an interesting and helpful sourcebook that has guided me to some previously unknown resources. It also includes discussion questions so it could be used in a classroom setting. I’m planning now to order the Missouri volume, and I’m looking forward to those upcoming volumes on other trans-Mississippi states and territories.
Posted by Jane Johansson at 7:57 PM No comments: