Several weeks ago, I received the latest edition of The Chronicles of Oklahoma and was pleased to see an article about "Fort Blunt Civil War Fortifications" by Robert Cole who is described as "an avocational historian and archaeology enthusiast." I've long been curious about fortifications built at Fort Gibson (renamed Fort Blunt in 1863) during the War. Cole's twenty-nine page study is based on an extensive on-ground survey coupled with an examination of a wartime map drawn by Captain William Hoelcke, military manuals, the Official Records, and various other primary sources. Although ultimately concluding that the Hoelcke map was probably a preconstruction plan, the map still proved useful in locating some fortification remains in a residential area as well as some near the Neosho River. Why weren't more remains discovered? Cole noted "that shallow, not easily penetrated bedrock hindered the main earthworks construction almost from its inception and effectively placed the project on hold until the spring of 1864. Concurrent with the earthworks construction stoppage in late April and early May 1863 was the building of interim lines of defense, presumably along the same route as the eventually erected earthworks. The nature of interim fortifications is not known, but there is some suggestion these defenses may have been of earthen construction, utilizing soil overburden above the shallow bedrock in the northeast arm of the fort" (327). The article is a well-illustrated piece of detective work and certainly the most detailed examination of Fort Blunt's fortifications that I've read.
Posted by Jane Johansson at 4:07 PM No comments:

The Henry Rifle and the Battle of Prairie Grove

The Battle of Prairie Grove was fought 155 years ago today, and one of the participants was Major Albert C. Ellithorpe of the First Indian Home Guards. His regiment consisted primarily of refugee Seminoles and Muscogee Creeks from the Indian Territory and were part of James G. Blunt’s Kansas Division. This division arrived on the battlefield after soldiers from Francis J. Herron’s division had launched several bloody and futile attacks on Confederates from Thomas C. Hindman’s army. Ellithorpe’s regiment gave a “war yell” after positioning itself to the right of Herron’s Twentieth Iowa Infantry, and then the two regiments advanced toward the enemy. Ellithorpe had purchased a Henry rifle earlier in the year. This repeater had a sixteen-shot magazine and fired a .44 caliber bullet. Ellithorpe proudly wrote a month after the battle that, “my ‘Henry’ has done its work well I emptied 32 shots from it at the Battle of ‘Prarie Grove’ at a very short range. I think the gun has done good service.” The Major was so taken with the weapon that he asked for permission “to raise a battalion of sharpshooters” that would be equipped with the Henry rifle. For reasons unknown, his request was never granted. Were any other soldiers equipped with the Henry rifle at Prairie Grove? If any Henry bullets are ever excavated from the ground where the First Indian advanced, then they were probably fired by the redoubtable Major Ellithorpe.
Posted by Jane Johansson at 2:04 PM No comments:

The Battle Flags of Minnesota

All of Minnesota's Civil War units, with the exception of the 1st Minnesota Infantry, served in either the Western Theater and/or in the trans-Mississippi. The Minnesota Historical Society is to be commended for creating a website that features photographs of surviving battle flags, short histories of each regiment and battery, and artifacts associated with different units. Conservation efforts are highlighted with a short three minute video. Check it out!
Posted by Jane Johansson at 2:35 PM No comments:

This Thursday, I'll be speaking to the members and guests of the Civil War Roundtable of Central Louisiana on "A Constant School of Excitement: Albert C. Ellithorpe and the Border War." I'm looking forward to my trek into Louisiana and the opportunity to share information about the trans-Mississippi war to an interested audience!
Posted by Jane Johansson at 9:31 AM No comments: 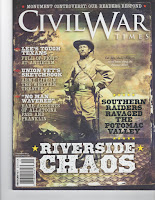 Posted by Jane Johansson at 4:49 PM No comments: 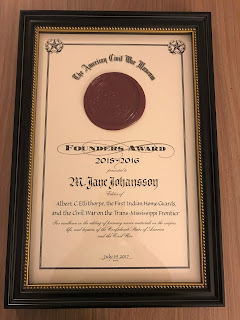