Frederick H. Dyer’s A Compendium Of The War Of The Rebellion (1908) contains short histories of nearly every Union unit. Printed in two columns, most of these histories are no more than a column in length. However, the history of the 3rd Iowa Cavalry takes up nearly an entire page; these remarkable troopers certainly spent the war on the move. They were severely battered at the battle of Pea Ridge losing 24 killed, 17 wounded, and 9 missing. Some of their soldiers were scalped at Pea Ridge, and it is believed that some of their wounded were murdered there. The 3rd Iowa Cavalry continued to serve in the trans-Mississippi for a time but went on to participate in the Vicksburg campaign and a number of actions in the western theater. The men returned to the trans-Mississippi to defend against Price’s Missouri Raid in the fall of 1864. These Iowans were among the soldiers that made the greatest cavalry charge west of the Mississippi—perhaps I should reword that because it was one of the most spectacular cavalry charges of the war. This charge by well-armed Union cavalrymen mangled a Confederate cavalry force along Mine Creek in Kansas. In a future posting, I’ll include some photographs from the week of touring including more about Mine Creek.

If you are interested in more information about the 3rd Iowa Cavalry, check out the following web sites:

3rd Iowa Cavalry: Although this site doesn’t appear to be up-to-date, it does have rosters, photographs, and other information about the regiment.

Posted by Jane Johansson at 9:56 AM 3 comments:

"Man Must Die Sometime...": The Engagement at Honey Springs

Today is the sesquicentennial of the engagement at Honey Springs in the Indian Territory. The Honey Springs Battlefield is preserved today by the State of Oklahoma and is well worth visiting. About 2,800 Union soldiers and between 3,400-5,100 Confederate soldiers were at the battle according to an Encyclopedia of Oklahoma History and Culture article. Besides being a significant Union victory, the engagement was notable for the fact that white troops, Native American units, and an African-American regiment (the 1st Kansas) were involved in the battle.

A Creek Warrior for the Confederacy: The Autobiography of Chief G. W. Grayson, edited by W. David Baird, is a favorite Oklahoma history book of mine. George Washington Grayson served in the Second Creek Mounted Rifles at Honey Springs and here is a portion of his account of the engagement:

“…with our colonel Chilly McIntosh in immediate command, we were ordered to occupy a certain position in a dense bottom of the creek, and to remain out of sight under cover of the foliage of the trees until ordered to take active part in the day’s work. Here we remained listening breathlessly at the rattle of small arms and an occasional exulting whoop that was one of the characteristics of the fighters of the southern forces, and anxious to take a hand in the affray, but could do nothing without orders. The morale of our men was the best, and they could and would have made things alarmingly unpleasant for whomever they might be pitted against.

On this occasion I remember hearing delivered by our colonel in Indian the finest war-speech I ever heard. Among other things said by him in [the] course of his talk in which the men were urged when the time came to do their full duty fearlessly and bravely, [was]

When you first saw the light, it was said of you ‘a man child is born.’ You must prove today whether or not this saying of you was true. The sun that hangs over our heads has no death, no end of days. It will continue indefinitely to rise and to set; but with you it is different. Man must die sometime, and since he must die, he can find no nobler death than that which overtakes him while fighting for his home, his fires and his country.” (pages 62-63).
Posted by Jane Johansson at 6:56 PM No comments:

Earlier this week, I made a quick visit to the Wilson’s Creek National Battlefield where I particularly focused on Colonel Franz Sigel’s surprise attack on the southern end of the Confederate encampment. At first his attack went well, and his men advanced steadily along Wilson Creek and through Sharp’s cornfield. However, things went awry as Backof’s Missouri Battery was placed near the Wire Road right before it dropped down into the Wilson Creek valley. The artillerists could not cover the zone before them, and Sigel did not send out an adequate picket force to guard from surprise. Additionally, his infantry, the 3rd Missouri and the 5th Missouri, were poorly situated well behind the artillery.

This photo shows Backof’s artillery position along the Wire Road: 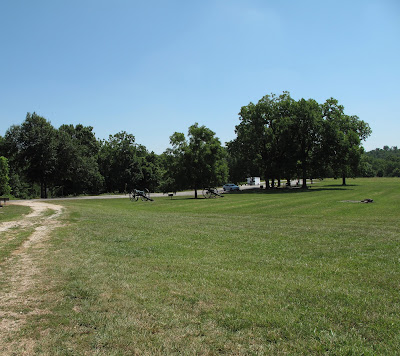 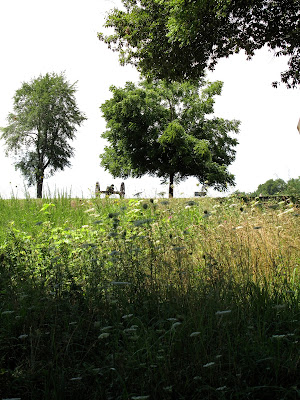 Again, this photograph is a view from the Confederate perspective. Imagine Union soldiers in flight along the Wire Road and through the fields after being routed by Confederate troops. 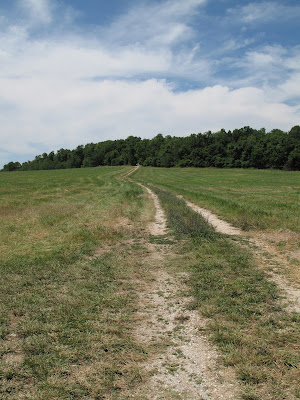 Posted by Jane Johansson at 5:30 PM No comments:

On a recent Saturday, I woke up and wanted to go on a road trip. Where to go? The Fort Smith NationalHistoric Site was selected as the day’s goal. Conveniently arriving in Van Buren at lunchtime, I dined there, browsed in a bookstore, and then drove the short distance to the old Fort. Established in 1817 near the confluence of the Arkansas and Poteau rivers, the military abandoned the fort seven years later but then reestablished it in 1838. The commissary and barracks buildings are the only structures remaining from the Civil War years. Although little fighting took place in the Fort Smith area during the war, control over the region often figured in the strategy for both sides. In 1863, Union forces secured control of the Fort for the remainder of the war.

In the postwar period, the fort was closed in 1871, but the Federal Court for the Western District of Arkansas was established the following year. The creation of the court led to the addition of a  jail and courthouse onto the barracks building. Judge Isaac C. Parker famously presided over this busy district court for several decades as authorities attempted to exert control over the wild Indian Territory.

The visitor’s center has a number of fine displays that tell about the fort, the court, and the colorful characters associated with them. My favorite artifact was a large photograph from 1895 showing outlaw Crawford Goldsby (Cherokee Bill) in Wagoner, Indian Territory, after his arrest. With his arm around Deputy Dick Crittenden and a big smile on his face, Cherokee Bill was attempting to reach down and pull out Crittenden’s pistol. Luckily for Crittenden and others in the crowd, Cherokee Bill was unsuccessful in that attempt. If you’re ever in the Fort Smith area, drop by for a visit to the old Fort!

The location of the first fort: 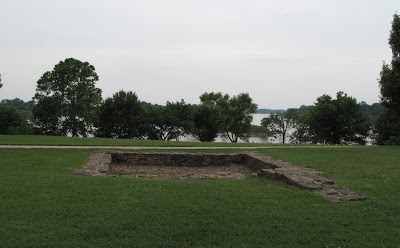 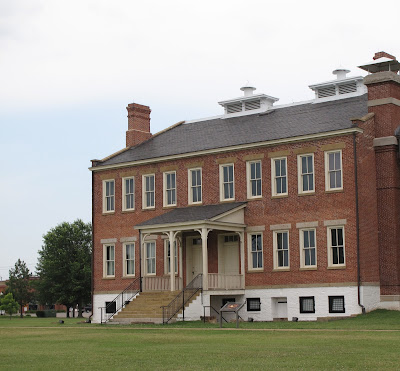 The Old Barracks Building showing the addition of the courthouse and jail: 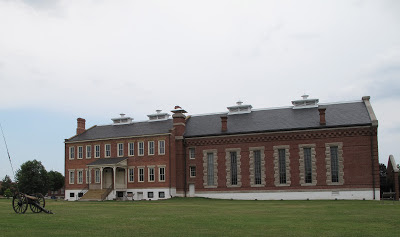 Like almost every Civil War blogger, I have succumbed to the Gettysburg hoopla. I agree that Gettysburg was a significant battle, but some of the media stories give the impression that it was THE MOST IMPORTANT BATTLE OF THE ENTIRE WAR. Was it? I have some doubts…