The Importance of Guerrilla Warfare

For many years, guerrilla warfare has been regarded as little more than an intensely violent and rather localized sideshow of the American Civil War. Recently, I read Daniel E. Sutherland’s A Savage Conflict: The Decisive Role Of Guerrillas In The American Civil War (: The University of North Carolina Press, 2009) and emerged with a much greater appreciation for the immense importance of guerrilla warfare.

Rather than being confined to a handful of geographic areas during the war—, , and spring readily to mind—guerrilla warfare occurred in every southern state as well as some northern ones as well. And this warfare was not minimal in nature but had a significant impact on the civilian population as well as the course of the war. What was so decisive about guerrilla warfare? Dr. Sutherland uses a vast array of primary sources to argue convincingly that “Rebel irregulars also helped their nation lose the war” (277). The inability of the Confederate government to control the activities of their "irregulars" led to situations where guerrillas did not work in tandem with the military; also outlaws and other criminal types preyed on southern civilians who yearned increasingly for the return of order and stability even if it meant victory for the Federals. As Sutherland explains it “The inability of political and military leaders to exploit the benefits of guerrilla warfare splintered a national bid for independence into a hundred local wars for survival and shook public confidence in the ability of the government to protect its citizens” (278). Moreover the guerrilla war and the animosities it generated spilled over into the Reconstruction period.

This is one of the most important books that I have read in recent years about the war, and I hope that it is read widely. Several months ago, Drew Wagenhoffer posted an excellent interview with Dr. Sutherland about his book and its important conclusions. I encourage you to check it out!

While thumbing through volume 22, part 1 of the Official Records several years ago, I came across the most amusing battle reports. Filed by Confederate Colonel Joseph O. Shelby, they are splendid examples of purple prose. I have a vague recollection of reading somewhere that the reports were actually written by John N. Edwards; perhaps one of my readers can comment as to whether that is correct or not.

For your reading pleasure here are two snippets from Colonel Shelby’s reports:

“…Upon the eventful morning of the 7th [battle of Prairie Grove], long before the full round moon had died in the lap of the dawn; long before the watching stars had grown dim with age, my brigade was saddled, formed, and their steeds champing frosted bits in the cold, keen air of a December morning, ready and eager for the march. After advancing rapidly and without intermission for several hours, I struck their trail, hot with the passage of many feet, reeking with the foot-prints of the invader. It needed no command now to close up. Their was no lagging, no break in serried ranks, no straggling from the line, but each man grasped his gun with the strong, firm grasp and the strange, wild looks of heroes and born invincibles…” (vol. 22, pt. 1, 149)

“GENERAL: On the last day of December, 1862, when the old year was dying in the lap of the new, and January had sent its moaning winds to wail the requiem of the past, my brigade…were on the march for foray on the border’s side….’Twas a bright and beautiful scene. There lay the quiet town [Springfield, Missouri], robed in the dull, gray hue of the winter, its domes and spires stretching their skeleton hands to heaven, as if in prayer against the coming strife, and, drawing near and nearer, long black lines came gleaming on, while the sun shone out like a golden bar, uncurling its yellow hair on earth and sky, stream and mountain, and lent the thrilling picture a sterner and fiercer light. My skirmishers advanced steadily, and now continual shots in front tell that the enemy are found and pressed sorely.” (vol. 22, pt. 1, 199-201)

Snippets of poetry are scattered through the reports as well plus many more examples of purple prose. I have often wondered how officials in the War Department reacted to these reports. Were they amused? Impressed? Horrified? It would be fun to know!

Another Example of Impressive Footwork

Soldiers in the trans-Mississippi certainly were involved in a number of impressive marches! Recently, I came across another example to add to the marching feats mentioned in my posting of 19 February. Union Colonel James M. Williams wrote the following on 20 September 1864 from Pryor’s Creek in the :

“I arrived here at 11 a.m. yesterday, and met the advance of Gano and Stand Watie’s command, consisting of 2,300 men with six pieces. The enemy had captured the train and post at Cabin Creek in the morning, and were returning with their booty (this information is from a prisoner). My command (all infantry and artillery) was completely exhausted, having marched eighty-two miles in the last forty-six hours, carrying their knapsacks [italics added]. I immediately formed my line and prepared to give battle. Skirmishing was kept up until 4.30 p. m., when the enemy’s line came within range of my Parrott guns, and I soon drove them back and continued skirmishing until dusk, and bivouacked in line of battle on the field. This morning the enemy has disappeared, it is supposed across the . Had my troops been fresh I think I could have recaptured the train; as it was, I was unable to move without rest….” (Official Records, 41, pt. 1, 765).

After such an incredible march, I doubt that any of Colonel Williams' superiors chastised him for failing to continue on after the captured wagon train.

Several years ago, I viewed an exhibit of Kansas Civil War battle flags in . These flags were incorporated into an exhibit about and its role during the Civil War rather than being in a “stand alone” exhibit. The fact that soldiers, both Union and Confederate, were willing to die to protect their banners is extraordinarily moving, and I am willing to travel long distances to see these special relics in person. In a recent posting I listed several books about Confederate Trans-Mississippi banners, but I have been unable to locate any books specifically about flags carried by Union units from west of the . If any readers know of any such publications, then please let me know.

I did, however, locate some excellent websites that document Union flags. Start by going to a directory of flag conservation projects assembled by the Sons of Union Veterans of the Civil War. The listing includes projects from across the country, but I was particularly impressed by the websites about ’s battle flags as well as the one about ’s Civil War banners. Additionally, check out the website of the Kansas State Historical Society that has an online exhibit about flags. This online exhibit is geared toward children, but it includes some excellent images of Confederate and Union Trans-Mississippi banners. The Minnesota Historical Society also has an online exhibit of Civil War banners plus a three minute podcast by curator Doug Bekke about the conservation process.

Posted by Jane Johansson at 4:13 PM No comments:

Today is the 148th anniversary of the first day of major fighting at Pea Ridge (or Elkhorn Tavern). Recently, while surfing the net I came across a publication written by Carl G. Carlson-Drexler, Douglas D. Scott, and Harold Roeker titled "The Battle Raged...With Terrible Fury": Battlefield Archeology of Pea Ridge National Military Park. This 170 page document was published in 2008 by the Midwest Archeological Center of the National Park Service. To read the report click on this link for the Midwest Archeological Center and then scroll down until you find the title listed above. There is also a lengthy report listed on the MWAC's website about the investigation at the Wilson's Creek battlefield. Battlefield archeology has become an important supplement to the traditional work of researching written sources, and this publication documents a recent survey of parts of the . The publication includes a history of the battle, an explanation of the field survey, a detailed discussion of the artifacts discovered (with photographs included), and an interpretation of the findings. There are also some tables included that detail the weapons carried by various and Confederate units at the battle. All in all, it provides fascinating insights into the value of using archeological techniques to document battle actions.

The flags used during the American Civil War are fascinating to me. Several years ago I had the great pleasure of attending an exhibit of historic flags at the of in . The exhibit consisted of flags from the Texas Revolution through World War II, but the highlight for me was seeing the flags from the Civil War era. At the time, I had recently completed my books relating to the 28th Texas Cavalry, and so I was rendered nearly speechless when I viewed a large banner carried by an unidentified unit of ’s Division during the campaign. Likewise, I was thrilled to see a flag carried by the 6th Texas Cavalry Battalion (Gould’s Battalion) that served with the 28th Texas Cavalry (dismounted) in the same brigade of ’s Texas Division. The flags included in this exhibit are illustrated in the book by Robert Maberry, Jr. titled Texas Flags (: A & M Press, 2001), and some are depicted on this website of the Texas Sons of Veterans. Seeing in person the actual flags that were used during the war was quite a moving experience; if only those pieces of cloth could speak! 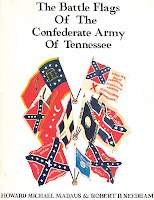 arranged to see Randall L. Gibson’s headquarters flag that Union soldiers captured at the battle of . Although a small banner, I enjoyed seeing an artifact that directly related to this hard fighting brigade. On my visit, I also received a tour of the flag conservation area and was amazed at the incredibly time consuming and detailed work that must be done during the conservation process. The Museum of the Confederacy now has online a complete inventory of their flag collection along with color photographs. Follow this link to the inventory and then click on MOC Flag Collection when you get to the site. Although the bulk of their collection consists of flags of regiments from east of the Mississippi, there are some fine Trans-Mississippi flags included too such as the beautiful banner that the 4th Missouri carried at the battle of Pea Ridge.

Photographs of some of the flags carried by troops are shown on the website of the Old State House Museum. And, the following are books that include helpful information about flags carried by Confederate Trans-Mississippi units:

Madaus, Howard Michael and Robert D. Needham. The Flags Of The Confederate Army Of . : , 1976.