A Soldier in the Fourth California Infantry 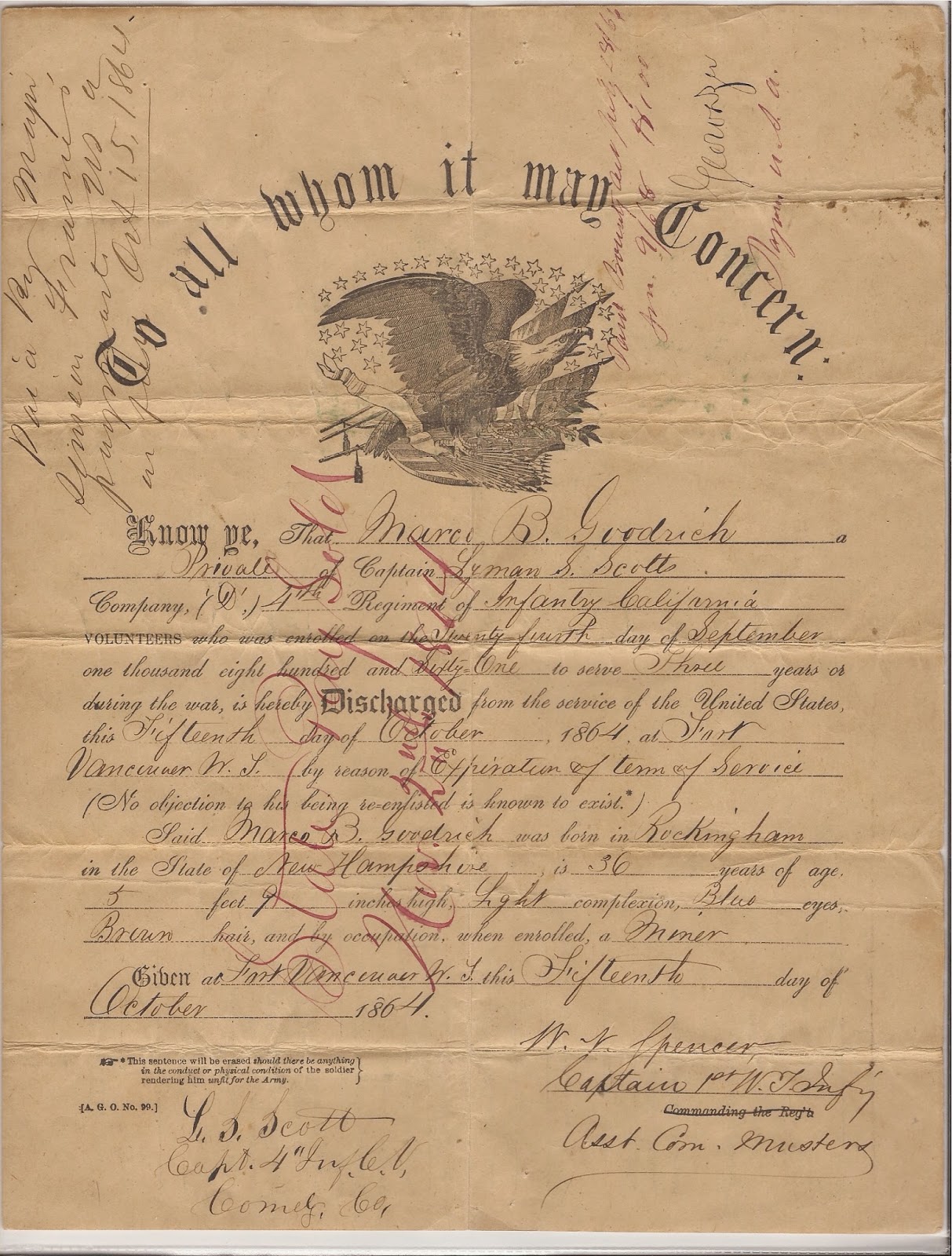 Recently, I purchased a small lot of Civil War discharge papers that I plan to use as the basis for small research projects in a couple of my classes. Among the lot was one for a California soldier whose company (D) served mainly in the Pacific Northwest. Marco B. Goodrich, a miner, enlisted on September 24, 1861 for a three-year term and was discharged on October 15, 1864 at Fort Vancouver in the Washington Territory. Other tidbits: Goodrich was originally from Rockingham, New Hampshire, and was 36 years old when discharged meaning that he possibly participated in the California Gold Rush.
Posted by Jane Johansson at 4:33 PM 4 comments:

One of the classics of Civil War literature is War Letters, 1862-1865, Of John Chipman Gray And John Codman Ropes (1927). Recently, I read this book for the first time and enjoyed the well-crafted letters that revealed much about the personalities of the two friends. Both men were Bostonians. John Codman Ropes had a physical disability that prevented him from serving in the military, but he maintained a keen interest in the war that led to his authorship of some postwar studies.

John Chipman Gray served on Brigadier General George Henry Gordon’s staff and ended up on the periphery of the war. During the battle of Fredericksburg he was at Fairfax Station, Virginia; during the Chancellorsville campaign he was at Suffolk; and while the battle of Gettysburg was fought he was at White House, Virginia. Gray served in operations near Charleston, South Carolina, but that was the only major campaign he participated in. His travels even took him down the Atlantic coast, around Florida, into the Gulf of Mexico, and up the Mississippi River and then the White River in Arkansas. This Eastern dandy liked New Orleans (“a very bright, pretty city, the streets are well paved and exceedingly clean”), but while on a steamboat admitted “it is rather hard to get used to the Mississippi water. Before drinking it is filtered in some way so that what is placed on the table looks merely like dirty water, but the water that you wash in is exactly the color of strong coffee with a little milk in it” (p. 359).

Gray conceded on his journey that some of his preconceived notions were inaccurate. “With regard to the general appearance of the Westerners, it is not so different from our own as I had supposed, but certain it is that discipline is most astonishingly lax…In Memphis there was a sentry whom I had to pass daily, he was always seated in an arm-chair, his gun rested on the wall near his side, he was often reading, and had another chair by him for the convenience of any friend who might like to stop and chat a while. This is no solitary instance, I might tell you of a dozen things as strange” (p. 364-365). He observed that “The run of officers and citizens that one meets in the towns and on the boats is much less rough than I had anticipated, and I have never seen officials more civil and accommodating than the Captains and Clerks of the river boats. My prejudices again the West have been materially lessened by the experience I have had” (p. 365).
Posted by Jane Johansson at 7:51 PM No comments: