Union veterans had the option to have a government issued headstone. Confederate veterans or their survivors had to purchase their own headstone. In Pryor, seven gravesites were marked with United Confederate Veteran markers; unfortunately two of the headstones were illegible. The legible ones included ones for J. H. Hendrex 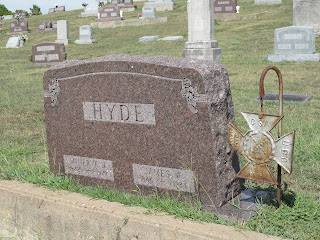 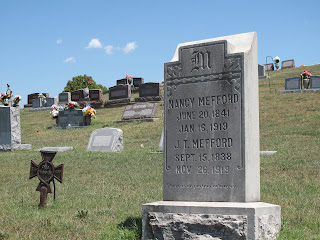 Further research is needed to determine the military units that they served in. James H. Hendrex, a native of , was located in the 1880 census; at that time he was farming in St. Clair County, Missouri. Intriguingly he had a son named Sterling Price Hendrex. J. T. Mefford, a native of , resided in Pryor in 1910 and worked as a butcher. By far the most distinguished of the Civil War veterans buried in is Samuel Houston Mayes, a mixed blood Cherokee, who enlisted as a teenager in the 2nd Cherokee Regiment. 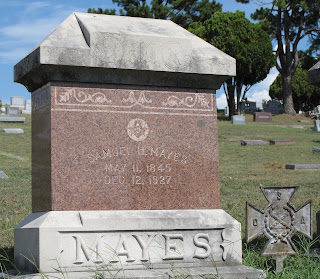 The details of his wartime service appear unknown but one source stated that Mayes “served intermittently.” The 2nd Cherokee fought at the battle of Pea Ridge () and Honey Springs (Indian Territory) plus in a number of other skirmishes mostly in the . Mayes became a successful businessman and even became principal chief of the Cherokees. , where Pryor is located, was named in honor of Samuel H. Mayes. Further details and a picture of Mayes can be found by reading an entry about him in the Encyclopedia of Oklahoma History and Culture; this short biography also includes links to articles in The Chronicles of Oklahoma about the Mayes family. Samuel’s older brother William Henry Harrison Mayes also is buried in Pryor; he served in the 1st Cherokee Regiment. 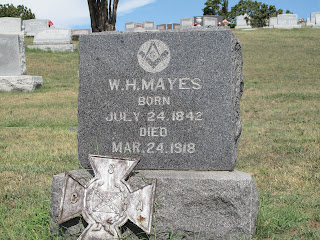 At least eleven Civil War veterans are buried in . They originated from several different states as well as the Indian Territory and yet all had a common denominator—all migrated to the Pryor area. The twin territories, the Indian Territory and the , were attractive to many in the late nineteenth century as the federal government opened this “last frontier” to white settlement.

Posted by Jane Johansson at 9:50 AM