On a recent road trip, my mom and I stopped at the Camp Nelson Confederate Cemetery near Cabot, Arkansas. When Americans observe Memorial Day, we often think first of those who died in combat, but many more soldiers died of disease during the Civil War than as a result of battle. A sad example of this fact is the Camp Nelson Confederate Cemetery that today is tucked into a quiet neighborhood. In the winter of 1862 and into the spring of 1863, Confederate soldiers encamped in the area fell victim to deadly diseases such as measles and pneumonia. A poor diet, exposure to harsh weather, poor sanitation, and a lack of immunity led to a nightmarish situation for these Arkansas and Texas soldiers. In fact Camp Nelson itself was named for one of those who succumbed: Colonel Allison Nelson, the commander of the 10th Texas Infantry. The exact number of soldiers who died in the area that winter is unknown, but it is estimated that at least 1,500 men passed away. Today, they lie in unmarked graves.
A modern marker: 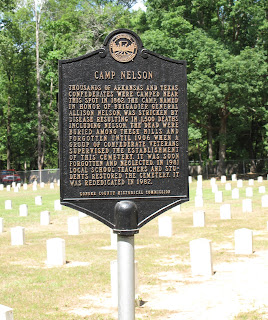 A view of the 1905 monument at the cemetery: 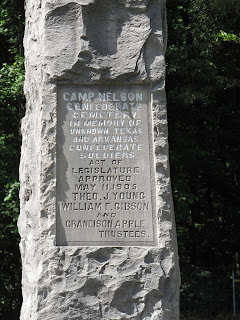 A view of some of the markers for unknown soldiers: 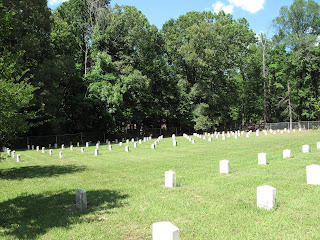 Arkansas and Texas state flags fly at the cemetery: 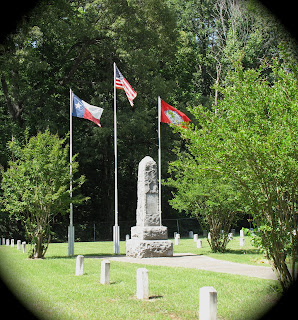 Earlier this week, I returned from a much needed break, a road trip across parts of Arkansas, Louisiana, Mississippi, and Tennessee. Of course, along the way some Civil War sites were visited and upcoming posts will feature some of these sites. For now, though, this is the next installment featuring the Union regiments from William Fox’s list of 300 Fighting Regiments that served in the trans-Mississippi. The 11th Illinois Infantry started as a three months unit that initially saw duty in Missouri but then went on to serve primarily east of the Mississippi River. For additional information about the regiment see the following:

Present, also, at Fort Henry, Tenn.; Siege of Corinth; Trenton, Tenn.; Benton, Miss.; Spanish Fort, Ala.
Notes.--Mustered in originally as a three months regiment. It was remustered at Bird’s Point, Mo., for three years, on July 13, 1861, one-third of the men remaining in the service. The regiment performed garrison duty in Missouri until February, 1862, when it embarked on the campaign against Forts Henry and Donelson. In the storming of Fort Donelson it lost 70 killed, 181 wounded, and 88 missing; a total of 339 out of about 500 engaged; many of the missing were killed or wounded. The regiment was then in W. H. Wallace's Brigade of McClernand's Division. At Shiloh, it fought in Marsh’s (2d) Brigade of the same division, taking 239 officers and men into action, and losing 17 killed, 69 wounded, and 17 missing; total, 103. During the Vicksburg campaign it was in Ransom's (2d) Brigade, McArthur's Division, Seventeenth Corps. In the assault on Vicksburg, May 22, 1863, it lost 3 killed, 30 wounded, and 9 missing; Colonel Nevins was among the killed. At Liverpool Heights, February 5, 1864, it lost 4 killed and 9 wounded; at Yazoo City, March 5th, 9 killed, 24 wounded, and 12 missing. In July, 1864, it marched with General Slocum's Expedition against Jackson, Miss. On July 29, 1864, it moved to Morganzia, La., and in March, 1865, it was engaged in the siege operations about Mobile, and in the fighting at Fort Blakely. In April, 1863, the One Hundred and Ninth Illinois was discontinued, and the men, numbering 589 (on the rolls), were transferred to the ranks of the Eleventh. The Eleventh was mustered out July 14, 1865, and the men with unexpired terms of enlistment were transferred to the Eighth and Forty-sixth Regiments, Illinois Infantry” (Fox, p. 355).
Posted by Jane Johansson at 7:51 PM No comments:

The academic year is over at my university, and I am taking about a two week break from the blog. So...I'll be recharging and thinking of some new ideas for postings. See you soon!
Posted by Jane Johansson at 7:22 PM No comments: