This is a personal indulgence posting—a bit off the subject of the blog but on a topic that I wanted to write about. In recent years, I have written two short biographical pieces about Confederate Brigadier General Daniel Weisiger Adams. The shorter piece appeared in Kentuckians in Gray edited by Bruce S. Allardice and Lawrence Lee Hewitt, and the longer essay was published in Confederate Generals in the Western Theater (volume 3), edited by Lawrence Lee Hewitt and Arthur W. Bergeron, Jr. Adams moved to New Orleans in the late 1850s, entered into business, and quickly made a number of important connections. For part of the war, Adams commanded the Louisiana brigade of the Army of Tennessee, and later became a district commander in Alabama; his brother, Wirt, also became a brigadier general.
Adams, a native Kentuckian, grew up in Mississippi where his father, George, served as a federal judge. In 1843, not long after the younger Adams started practicing law, Vicksburg newspaper editor, Dr. James Hagan, published an editorial hinting at improprieties by Judge George Adams during a sensational investigation of alleged embezzlement by Mississippi’s state treasurer. Infuriated, Daniel Adams traveled from Jackson, Mississippi, to Vicksburg where he armed himself at the urging of friends. On June 7th, the 22 year old Adams accosted James Hagan. What follows is a transcription from the June 14, 1843 edition of The Southron newspaper published in Jackson:
“Mr. A. met with Dr. H. while the latter was returning from his boarding house to his office. When within a few yards of him, he called to Dr. H. and stated that a scurrilous article against his father had appeared in the Sentinel, which he then held in his hand, and he desired to know the author of it. Dr. H., without making any further reply, advanced upon Mr. A., who at the same time raised his walking cane and struck at Dr. H., who caught the blow on his arm, and immediately seized Mr. A. around the waist. They grappled with each other and after a short struggle both came to the ground, side by side, but Mr. A. being farther down on the slope of the hill, Dr. H. succeeded in getting on top and fixing his hand upon the throat of Mr. A. While in this position, Mr. A. drew a pistol from his side pocket and shot Dr. H., the ball entering just below the left shoulder blade and ranging along the spine to the back part of the head. He died immediately.
Mr. A. surrendered himself to the civil authorities….said without the least hesitation that HE had done the deed….The body was in Walnut Street, south of Jackson about forty feet towards Grove Street.”
A jury acquitted Daniel Adams of murder charges.
On a recent trip to Vicksburg, I visited the crime scene. The first view is looking across the intersection of Walnut and Jackson toward the southeast. Adams and Hagan started fighting somewhere near this intersection. 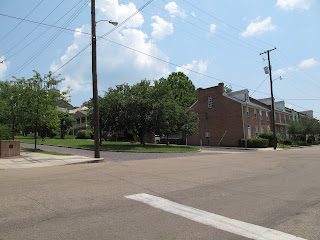 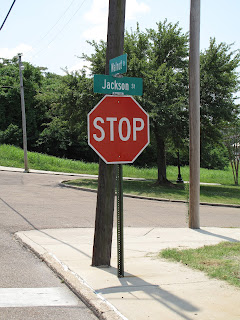 Posted by Jane Johansson at 7:43 PM