A couple of weeks ago, I drove north on a research trip; my destination was Topeka, the site of the Kansas Historical Society. This was my first time to conduct research at that facility, and I enjoyed my time there. Not far from Topeka is the small town of Lecompton that was the site of a number of controversial actions in the late 1850s. When I teach American History to 1877, I spend quite a bit of time talking about events in Lecompton. Of course, I had to visit.
Although there are several historic buildings in Lecompton, the Constitution Hall State Historic Site was my favorite. Constructed in 1855, the building served as a Land Office as well as the meeting place of the territorial legislature. 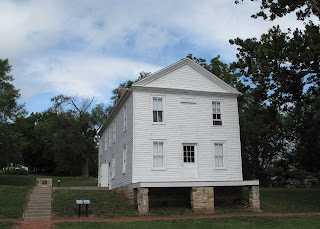 The Kansas Territory became the focal point for the struggle between proslavery and antislavery supporters. Would Kansas become a free territory or a slave territory? The national media flocked in to report on the action in Lecompton. In Constitution Hall, legislators drafted the Lecompton Constitution, a document that offered protections to slavery. Following a boycott by many Kansans of the referendum on the proposed constitution, the controversy spilled over into the U. S. Congress. After heated debates, a compromise was devised that required the Lecompton Constitution to be resubmitted to Kansans; Congress made it clear that if the Constitution was rejected then statehood would be delayed. Kansans rejected the Constitution by a wide margin and elected a number of free-soilers to the territorial legislature. The tide had turned.
Constitution Hall is a frame building that rather remarkably still contains much of the original flooring. It was a neat experience to walk on the same flooring as many prominent (and not so prominent) Americans of the 1850s. To see some additional photographs of Constitution Hall, including that flooring, check out the Kansas Sampler website.
Posted by Jane Johansson at 2:14 PM