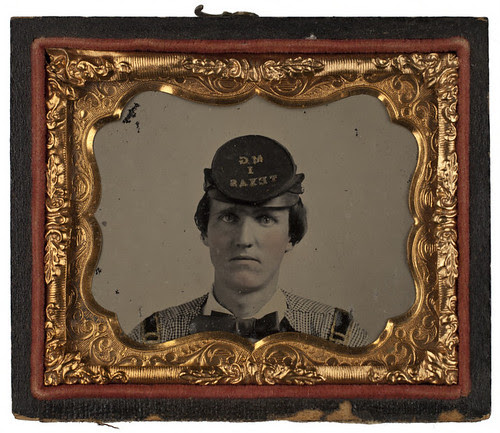 While surfing the net today, I came across this great wartime image that depicts Eli H. Baxter, Jr. as a member of the "Marshall Guards," a company in the 1st Texas Infantry. In the spring of 1862, however, Baxter became the lieutenant colonel of the 28th Texas Cavalry that was dismounted later in the year. What is exciting to me about this image is that it is the first documented wartime image of a member of the 28th Texas Cavalry that I have ever viewed--true, the photograph shows Baxter as a member of the 1st Texas Infantry, but this is close enough for me!

Baxter entered the United States Military Academy from Georgia in 1853 at the age of 16 and resigned in January 1854 because of academic deficiencies in mathematics and English. Following his resignation, Baxter went on to become an attorney and immigrated to Marshall, Texas, in the spring of 1858. Two years earlier, a young attorney named Theophilus Perry had immigrated to Marshall from North Carolina; he became a captain in the 28th Texas Cavalry and his letters reveal a dislike for Baxter.

For more information about both Baxter and Perry see my books:

Widows by the Thousand: The Civil War Letters of Theophilus and Harriet Perry, 1862-1864. Fayetteville: University of Arkansas Press, 2000.

Posted by Jane Johansson at 5:08 PM