A Quick Visit to Prairie Grove

Intense fighting occurred near the small town of , on 7 December 1862. For those interested in the campaign, William L. Shea’s Fields of Blood: The Prairie Grove Campaign (: The University of North Carolina Press, 2009) is the best modern account.

During spring break, I went on a one day road trip to , , and then on to . On the way, my friends and I stopped briefly at the . I have visited this park a number of times and have enjoyed the walking trail as well as the driving tour. Today, though, there was only time to stop at the Archibald Borden House, the scene of some hot fighting. The original Borden House burned during the conflict but the house you see here was built on the original foundation. Since my last visit, the house has been repainted and new windows have been installed. 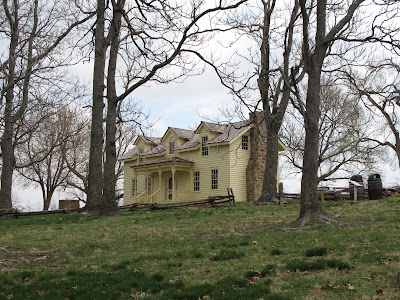 The photograph below is taken from the position of Captain William Blocher’s Arkansas Artillery Battery looking toward the ; the Borden House is not far behind this site. Several Union infantry regiments assaulted the Borden House ridge including the 37th Illiniois Infantry which advanced right toward this camera position. Earlier, the 20th Wisconsin Infantry had attacked across this view from the northeast. It is certainly a pretty view; one of my friends said it was peaceful, but it was anything but that on 7 December 1862. 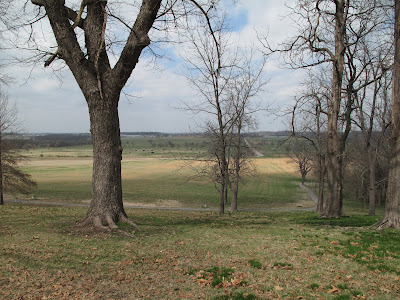 The 37th Illinois Infantry served mostly in the trans-, and its activities were expertly detailed by Michael Mullins in The Fremont Rifles: A History of the 37th Illinois Veteran

Volunteer Infantry (: Broadfoot Publishing Co., 1990). The book is out of print and pricey on the used book market but is a good read.

Posted by Jane Johansson at 4:05 PM