“Died—At La, on Sunday April 17th Capt. Theophilus Perry of Harrison Co. Texas, of a wound received at the battle of Pleasant Hill on the 9th while gallantly heading his Company. He was born in Franklin Co. N. C. on Feb. 5th 1833— “

These were the first words of the eulogy written by Harriet Perry in memory of her husband Theophilus, an officer in the 28th Texas Cavalry (dismounted) of ’s Texas Division. The 10 May 1864 issue of the Galveston Weekly News detailed the seriousness of his wound: 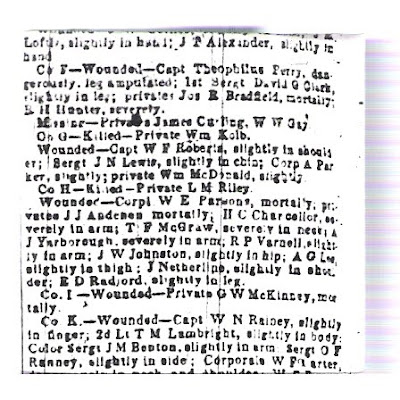 “’So live that when thy summons comes to join

The innumerable caravan which moves

To that mysterious realm, where each shall take

His Chamber in the silent halls of death,

Thou go not, like the quarry slave at night,

Scourged to his dungeon, but sustained and sooth’d

By an unfaltering trust, approach thy grave,

Like one who wraps the drapery of his couch

About him, and lies down to pleasant dreams’”

Posted by Jane Johansson at 9:58 AM