Recently, my friend Jim Carrick visited from Scotland, and we embarked on a multi-day series of day trips from Pryor, Oklahoma, to trans-Mississippi sites. Altogether, we visited Civil War sites on five days and traveled approximately 1,100 miles. What a great time! Here’s where we went:

Day One: We started at Wilson’s Creek National Battlefield where the staff rolled out the proverbial red carpet. Park Historian Connie Langum took us on a great tour of the park, and we left with a greater understanding of that early battle. Here is a photograph of Connie and Jim at the Pulaski Battery tour stop. 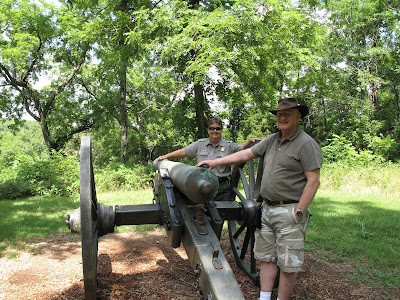 Day Two: We left about 7:15 am for a trip to the Pea Ridge National Military Park. I conducted today’s tour and concentrated on the Leetown battlefield and events near Elkhorn Tavern. Jim and I also discussed the logistical challenges of the campaign. Today was our hottest day of the week, but drinking lots of water and staying in the shade helped us cope with the temperatures. We ate sack lunches at the East Overlook—the shade and a nice breeze made for a delightful break.

Day Three: Off to Arkansas again for a visit to the Prairie Grove Battlefield State Park. An overcast day meant cooler temperatures for us. After a visit to Hindman Hall, we drove to the Borden House where we walked the trails; a highlight was tracing the route of the 20th Wisconsin Infantry as they charged Blocher’s Battery. Another was viewing the area where the 1st Indian Home Guard advanced. I could almost see Major Albert C. Ellithorpe, the subject of my current research project, leading his men there. Although the Prairie Grove campaign was somewhat complicated, the battle itself was notable for piecemeal Union attacks and a stout Confederate defense.

Day Four: Our longest day. We arrived at the Mine Creek Battlefield Historic Site soon after it opened for the day. We enjoyed a presentation by Adrian Zink, the site administrator, who told us about the campaign and showed us replica weapons. Several individuals involved in the battle were afterwards associated with George A. Custer in the postwar Indian conflicts. Another striking feature of the battle was the great superiority in weapons enjoyed by Union soldiers over their Confederate opponents.  After walking the Prairie Trail and discussing one of the largest cavalry battles of the war, we drove to the Fort Scott National Historic Site and met Arnold Schofield. Mr. Schofield gave us a fascinating tour of Fort Scott, a major supply depot and recruiting center during the war. The visit concluded with a fascinating tour of the National Cemetery.

Day Five: Just a short drive took us to the Cabin Creek Battlefield, the least developed and the smallest of the battlefields that we visited. The site was the scene of several actions during the war with the most famous being 2nd Cabin Creek where Confederate troops captured a wagon train worth an estimated $1.5 million. We met the caretaker of the battlefield, Herman Stinnett, who kindly invited us to his house following our park visit. He and his wife showed us relics from the battlefield and provided great hospitality.

We had also arranged for a tour of the Honey Springs Battlefield, but a heavy rainstorm (most unusual for late July) forced us to cancel our visit.

All in all, it was an outstanding week! How fortunate it is to have these diverse sites preserved for all to study, and how lucky we were to meet such friendly and helpful people. If you haven’t visited a trans-Mississippi battle site, then you’re in for a treat!
Posted by Jane Johansson at 7:08 PM