Blog reader Dan McCown sent me the following photograph from the Find a Grave website. 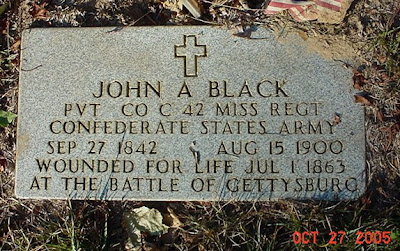 The marker is in the Bear Creek Tabernacle Cemetery about ten miles north of Avinger, Texas (Cass County). Dan was intrigued not only by the unusual inscription, “Wounded For Life” but also by the fact that the man was a Gettysburg veteran. I was intrigued too and did a bit of online research to find out more.

Black’s compiled service record was readily available on the Fold3 website, and it revealed a sad story. A 20-year-old farmer, John Adam Black enlisted in the 42nd Mississippi Infantry on May 14, 1862 in Grenada. His regiment saw no combat until some light skirmishing on June 30, 1863 near Gettysburg, Pennsylvania. As a part of Brigadier General Joseph Davis’ brigade the regiment was heavily engaged on July 1st where they tangled with several enemy units (including the famed 6th Wisconsin Infantry) near the Railroad Cut. During the regiment's advance, Black's Company C as well as Company D served on the skirmish line. The regiment went on to participate in “Pickett’s Charge” and altogether suffered casualties of 75 killed and 190 wounded, a loss of 46.1%, at the battle of Gettysburg. Private Black received a gunshot wound to his right leg sometime during the fighting on July 1st. Records do not reveal when he was evacuated from the battlefield, but he was admitted to Chimborazo Hospital #5 on July 17th and sent to Howard’s Grove Hospital later in the year. His records then become a little unclear, at one point stating he was “furloughed” but also listing him as absent without leave. In either case, his records noted: “J A Black is disabled for life by gunshot wound received in battle of Gettysburg July 1, 1863.”

Black returned to Mississippi and married Mary Isabell sometime after the war. By 1880, they had moved to Cass County where John worked as a laborer. The couple had at least five children—three sons and two daughters. Interestingly, the 1880 census does not list John as crippled or maimed, and he never applied for a veteran’s pension from the state of Texas. A few months before his death, the 1900 census enumerator listed Black as a teamster.

His widow survived him by many years, finally passing away on January 7, 1944; interestingly her son, Walter Oscar Black, died on the same day. They were listed as living in the same household in 1930 with Walter Oscar listed as a farmer.

What exactly did “Wounded For Life” mean? Did he indeed have a long term physical disability as a result of his wound? Did he suffer from mental health issues? Or, did he make a remarkable recovery, and thus the phrase “Wounded For Life” became a type of inside joke? Whatever the meaning of the inscription, John Adam Black’s life was a remarkable odyssey from Mississippi to the Gettysburg battlefield and then to a farm in east Texas.

Posted by Jane Johansson at 7:13 PM