"I was once tender hearted..."

This photograph shows the position of Good’s Texas Battery on March 8, 1862. Although a peaceful scene today, it would have been a very hot spot indeed during the battle of Pea Ridge. 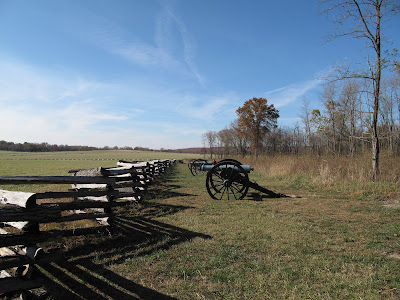 In an earlier posting, I documented the hard fight that an Iowa artillery battery endured during the battle. This time, I focus on the plight of Captain John J. Good’s Texas battery during the last day of the fight. Made up of men from Dallas as well as Smith County, John J. Good, an attorney from Dallas, commanded the battery during the unit’s baptism of fire. These battery boys first saw action near Leetown on March 7th, but would serve the next day near Elkhorn Tavern. Captain Good wrote about this latter action to his wife:

“…All were ordered around to Van Dorn. We reached the command in the evening. We had nothing to eat for two days before. We slept this night upon the ground with empty stomachs. Early next morning Van Dorn ordered my Battery to support his centre. We were no sooner in position than three batteries opened a perfect storm of round and 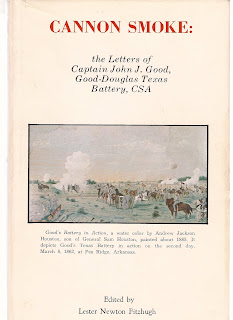 shrapnell shot and shell. We fought all for ¾ of an hour. Our shell and shrapnell having been expended and 25 men killed, wounded and missing, I ordered the Battery to retire. Hart’s Battery was ordered into my position and did not stay 10 minutes before they were litterally cut to pieces and retired. Just at this time to the astonishment of all the enemy made a bold dash at our centre, pierced it and Genl Van Dorn ordered a retreat….

The battle ground is strown with the dead, some killed by cannon balls, some with shell, some with rifle balls and some with bayonet thrusts. God forbid I shall ever again see such a sight….

I was once tender hearted, Sue, and expect to be so again when peace sheds her genial influence over the land, but on the field I had no more feeling for the dead Dutch than so many hogs. [I] did not budge from my course to avoid running over them. Confound them. I wish they were all dead and hope to have the pleasure of assisting soon in executions again….” From Fitzhugh, Lester Newton, ed. Cannon Smoke: the Letters of Captain John J. Good, Good-Douglas Texas Battery, CSA (Hillsboro, TX: Hill Junior College, 1971), pp. 165-166.

“…About 9 o’clock a.m. the Texas Battery and Churchill Clark’s Battery were ordered forward, and placed half mile to the front and southwest of Elkhorn Tavern, supported by a small battalion of Missouri infantry, about 100 strong. To the west across an open field were Curtis and Sigel. We opened fire with 6 guns and Capt. Clark opened 300 yards or more to our right. Very soon the Federal batteries replied from the edge of the woods beyond the field. A most terrific artillery duel followed. Capt. Clark was soon struck from his horse by a solid shot and after a short time the Missouri Battery made only a feeble response to the enemy’s guns, and all the Federal batteries turned their attention to the Texans, which was being splendidly served, every man being at his post giving the enemy the full capacity of our guns.

Here Charle Erwin fell dead at his gun. Billy Wilson had a leg swept off by a ball, and a number were wounded, besides a number of horses were killed or disabled….” From Lucia Rutherford Douglas, comp. and ed. Douglas’s Texas Battery, CSA (Tyler, TX: Smith County Historical Society, 1966), pp. 185-186.

Posted by Jane Johansson at 7:16 PM