When I researched the history of the 28th Texas Cavalry (dismounted) I had hoped to include a chapter that discussed the soldiers’ postwar lives, however, I found it challenging at best to trace them into the postwar years. When I conducted my research, the internet was not yet available which meant I had to rely on printed indexes and microfilm. To say the least, scrolling through reels of microfilm is a tedious business, and after a time I gave up on following these veterans into the postwar years. Admittedly, weariness settled on me since I had tried to locate all 1,000 plus men in the 1860 census and the tax rolls—enough was enough! Since writing my history of the 28th Texas Cavalry, I have heard regularly from descendants of men who served in the regiment. In this way, I have met a number of helpful and interesting people who have shared stories of their Confederate ancestors. The accounts about their wartime service interest me, but what happened to them after the war is often even more fascinating.

Most recently, Neusa Maria Wingeter di Santis of contacted me through the Texas in the Civil War Message Board, and what followed was a fascinating exchange about Neusa’s g-g-grandfather, Jacob Philip Wingerter. Private Wingerter enlisted in the spring of 1862 in the Freestone Freemen that soon became known more officially as Company H of the 28th Texas Cavalry. A state official listed him as having zero taxable property in the state’s tax rolls, and that was the extent of my knowledge concerning Private Wingerter.

Neusa informed me that her ancestor was part of a colonizing group led by Frank McMullen to in 1867. The McMullan-Bowen Colony, according to a census of the group, consisted of 97 hardy souls; many of the men were Confederate veterans. Most traveled as families to ; Jacob traveled there with his second wife, Susan, and his ten year old daughter, Amy. Jacob had already lived an exciting life; born in , he immigrated to the around 1854. Settling first in , he eventually moved to and then to . His first wife and their children died as the result of an accidental poisoning, and then he experienced many hardships while serving in ’s Texas Division in the trans-Mississippi.

The members of the McMullan-Bowen Colony left , , on the , an old British vessel. These southerners left for a variety of reasons—some were concerned about postwar unrest, others hoped to escape poverty, and for others there was the lure of fertile land in a country that had some cultural similarities to the South. The little group encountered many difficulties on their journey to . They were shipwrecked near and were forced to find other transportation—this led to a trip to and then, finally, to their colony near . This fascinating story is told by William Clark Griggs in The Elusive Eden: Frank McMullan’s Confederate Colony in Brazil (Austin: University of Texas Press, 1987).

Luckily, Neusa shared even more information with me about her ancestor. Before the war, he distributed religious tracts in , and I suspect that he continued doing so in and perhaps even when he served in the 28th . Several years after arriving in , , Confederate veteran and founder of the very first Presbyterian church in , hired Jacob as a colporteur. In other words, Wingerter distributed and sold religious tracts and Bibles. According to a letter written by , “It has been no unusual thing for the colporteur to leave one copy of the Bible in a village or neighborhood, going back in six months or a year, he has been able to sell a dozen copies.” After Jacob found it difficult to ride in his later 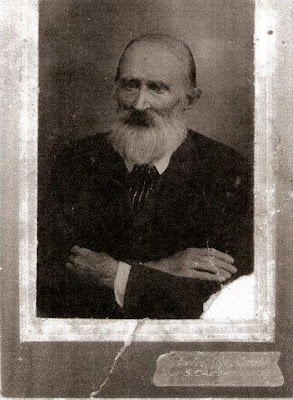 years, he worked for the American Bible Society. An admiring wrote that Jacob was “humble, patient, earnest, self-sacrificing, laborious, untiring, willing to toll anywhere, or at anything that the emergencies of the work demanded, but happier in proportion, as he was more directly engaged in extending a knowledge of the gospel.” Much of this religious information, according to Neusa, is from a book written by Dr. Alderi S. Matos who is the official historian of the Presbyterian Church in .

Neusa gave me permission to use the accompanying photograph of Jacob. It depicts him in 1914; he died two years later at the age of 83. He certainly lived a long, active, and fruitful life!

By the way, if you’re ever in on the second Sunday in April, you may wish to attend the Festa Confederada; Neusa reported that she attended the most recent one. The Festa Confederada is held alongside the in Santa Barbara D’Oeste, . Southern foods are served, many attendees dress in antebellum style clothing, and the heritage of the Confederacy is celebrated.

Posted by Jane Johansson at 8:42 AM