John O. Casler was an Oklahoman

John O. Casler’s book, Four Years In The Stonewall Brigade, is considered a classic in part because of his honesty; few other Confederate memoirs mentioned going on “French leave” or stealing from the dead. Not many readers, though, realize that Casler, a native Virginian, became an Oklahoman. According to James I. Robertson, Jr., in his foreword to the 1971 edition published by Morningside Bookshop, Casler participated in the 1889 Land Run that opened to white settlement parts of . Casler wrote his delightfully honest memoir in , and the first edition was printed in Guthrie. Casler was active in the United Confederate Veterans and lived at the Confederate Soldiers’ Home in for many years. He died in 1926 and was buried in in .

This past weekend I traveled to with a friend, and I determined to visit Casler’s grave site. Thanks to detailed and accurate directions from blog reader, Dan McCown, my friend and I easily located Casler’s headstone in . Here is a photograph of Casler’s headstone with my copy of Four Years In The Stonewall Brigade. 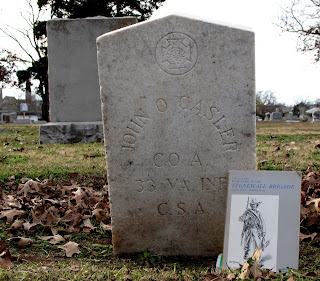 The GPS coordinates of his gravesite are N 35 degrees 29.826 and W 097 degrees 31.698. For those who prefer more traditional directions, here are the ones provided by Dan:

“Enter Fairlawn through the main gate on the south side of the cemetery. You will enter on . Turn left once you pass the gate and then take your first right and then the first left. Drive a short distance on the cemetery road to you come to an intersection where you have to turn either left or right. Stop your car and get out. To your immediate right is a large oak tree. Walk approximately twenty-five yards due west from the tree and you will see a small white stone much like they use at . The stone is somewhat isolated, has a pointed top and is leaning forward. This is John Casler’s grave.”

In spite of the chilly and blustery conditions, my friend and I were fascinated by this old and large cemetery and enjoyed looking at some of the other headstones such as this one marking the resting place of another ‘89er. 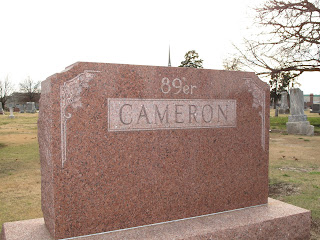 One of the notables buried at Fairlawn is Thomas Pryor Gore who served as one of ’s first Senators. Gore Vidal and Al Gore are two of Thomas P. Gore’s family connections. 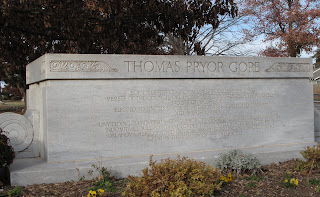 Posted by Jane Johansson at 7:22 PM