Earlier in the month, I spoke at a meeting of the Civil War Round Table of the Ozarks in . My talk was a biographical one that focused on Brigadier General Daniel W. Adams, the first commander of the Adams-Gibson Louisiana brigade that served in the Army of Tennessee. “Old Pelican” was an interesting character, and I enjoyed researching his life story. The audience of about 50 was quite attentive; there are many fine folks in the CWRT of the Ozarks, and I encourage you to attend one of their monthly meetings.

While on my way home the next day I stopped by the ’s Creek National Battlefield for a short visit. It was a gloomy, drizzly day, but I couldn’t miss the opportunity of visiting one of my favorite battlefields! I hope that you enjoy this mini tour.

Although not the best day for photography, I snapped a few shots.The park service has placed a cannon near the site of the Pulaski Battery's position, and this photograph shows the markings of the manufacturer. Many of the cannon barrels at the battlefields administered by the National Park Service do date from the Civil War as does this one. All of these images may be enlarged by clicking on them. 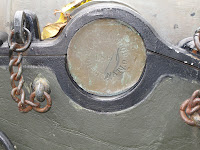 The Pulaski Battery, a Confederate unit from Little Rock, Arkansas, bombarded part of Bloody Hill; interestingly one of the Union batteries stationed on Bloody Hill was commanded by Captain James Totten who in the antebellum period had been stationed in Little Rock and gave the Pulaski Battery some instruction. The armies spent several hours contending for control of the hill with Confederate forces seizing it when the Unionists started retreating back to Springfield.

The wildflowers were in bloom and these were taken near the Ray House. 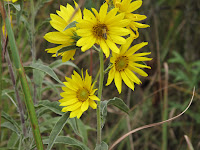 This photograph shows the Edwards Cabin situated near the Wire Road and used as a headquarters by Sterling Price, one of the Confederate commanders at the battle. This is not the original Edwards Cabin but a cabin dating from the 1850s that was moved into the park. 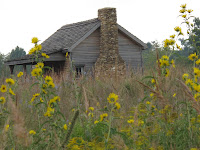 In this photo I have just crossed Wilson's Creek on the historic Wire Road and am walking along a park trail; in the distance is Bloody Hill. 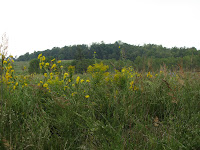 A view from the slopes of Bloody Hill looking back toward the Edwards Cabin in the far distance near the middle of the photograph. 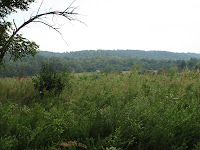 Posted by Jane Johansson at 6:58 PM