A Bit of Postal History

Several years ago I edited a collection of letters written between Theophilus Perry of the 28th Texas Cavalry (dismounted) and his wife, Harriet, who lived in the , area. Widows by the Thousand: The Civil War Correspondence of Theophilus and Harriet Perry, 1862-1864 was published in 2000 by the . Theophilus and Harriet were faithful correspondents who wrote nicely detailed letters recounting their daily lives; much is revealed about their personalities and their marriage in these well crafted missives. Captain Perry served in ’s Texas Division throughout his soldier life, and, tragically, he was mortally wounded at the battle of () on 9 April 1864. His letters recount much marching but little fighting—the only letter that discusses battle action is a letter where he writes of being held in reserve at the battle of Milliken’s . Harriet’s letters offer a fascinating portrayal of the life of an upper-class woman on the home front. She had an interesting personality with some of my readers feeling much sympathy for her while others think she was a whiner. After the book was published I “googled” Theophilus Perry and came up with a hit on a website run by Dr. John Kimbrough who buys and sells Confederate philately. Surprisingly, he had a “turned cover” actually used by Theophilus and Harriet in their correspondence. Talk about serendipity! Of course, I had to purchase it…. Dr. Kimbrough believes that Theophilus first used the cover. Here is the side addressed by Theophilus to Harriet who was living with her in-laws at the time: 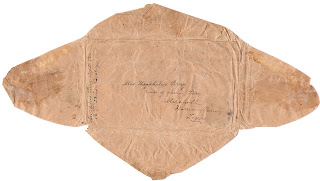 Harriet then turned the cover and reused it in a letter to her husband. 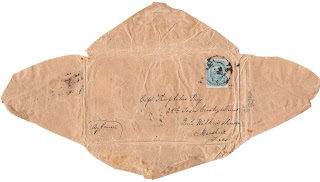 She addresses him as “Captain,” a rank that he achieved in July 1863. So the cover was used sometime between then and the spring of 1864 when Theophilus died during the campaign.