Over the years, I have visited the Pea Ridge National Military Park many times. Whenever I visit, I make it a point to locate something I’ve never seen before on the battlefield. On my last visit in November I decided to locate the position of Captain Junius Jones’ 1st Independent Battery, Iowa Light Artillery. Early in the afternoon of March 7, 1862, Colonel Eugene A. Carr, the commander of the 4th Division, ordered the battery into a position east of the Wire Road about 300 yards north of Elkhorn Tavern. The Iowa artillerymen were exposed to the fire of twenty-one Confederate guns that were positioned on Broad Ridge across a deep ravine from the Iowa battery boys. Confederate gunners hammered the Iowans scoring a hit on a caisson and inflicting heavy casualties on the Union gunners. During the barrage, Carr rode up to the Iowa artillerymen and yelled “’Give them hell, boys” (p. 112). For acts such as this one, Carr was awarded the Medal of Honor. The Iowa battery lost three killed and fourteen wounded during the battle, a high toll for a small unit.

My trusty guidebook (the source of the Carr quote and listed below) instructed me to “Walk along the hiking path to the north which follows the original roadbed of WIRE ROAD, and stop about 300 yards from the tavern” (p. 110). The area is now heavily wooded, and at one point I intentionally left the Wire Road and hiked over to Middle Ravine; Confederate artillery pieces were posted on Broad Ridge at the top of this ravine. Middle Ravine is impressively deep! I walked along this ravine back toward the tavern until I found a relatively flat area about 300 yards north of the tavern; this was probably the general location of the Jones’ Battery. The photograph below certainly doesn’t seem like much, but if the trees were removed from the scene then you would be able to see Broad Ridge in the distance. 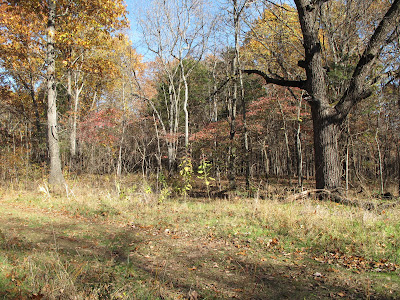 What was it like to be with the battery in the early afternoon of March 7, 1862? Captain Junius Jones reported:

“…I found Lieutenant Gambell actively engaged, the rebel guns having him in perfect range of grape, shell, and shrapnel. The fire of the rebels was galling in the extreme. Just as I delivered my second round Reese Parkhurst, acting as No. 3, was killed, a cannon-ball taking off his left leg and a piece of rock striking him in his head. I then had the prolonges fixed to fire retiring when necessary. Shortly after this event one of my caissons was exploded by a shot from the rebels, and another was lost to me by a runaway team running into the caisson team, which took fright, and they in running away capsized it down a slope, breaking the pole and otherwise disabling it. The team escaped. Two of the horses were subsequently recovered by Lieutenant David, as was by him two of my ammunition-chests and contents. By this time the rebels’ fire began to tell on my men….” (Official Records, series I, vol. 8, p. 265).

Posted by Jane Johansson at 4:31 PM