Hopefully readers will bear with me as I cross the mighty in this posting. I recently had the pleasure of visiting , my first visit to that battlefield since I was a teenager. In advance of the trip, I arranged for a tour with a licensed battlefield guide and asked to see the following sites:

--the area where the brigade fought on July 2nd

My interest in the 1st North Carolina Cavalry stems from the wartime correspondence of Theophilus and Harriet Perry that I edited a number of years ago. Harriet’s brother, Jesse Person, served in the 1st North Carolina Cavalry and was one of two soldiers killed in that unit on July 3rd in the fighting east of town. He was buried in the in Hunterstown on July 4th , and I also requested that the guide take me there if there was time. Accompanying me on this jaunt was my friend, Kyla, who has a limited interest in the Civil War but was game to go on the tour.

Jim Clouse, our licensed battlefield guide, met us on the morning of June 7th and took us away on a super tour that lasted four and a half hours. After driving through the areas fought over on July 1st and orienting Kyla to the battle, Jim drove us to the area where the brigade launched its attack on July 2nd. There have been many fine historians who have documented the actions of the 1st Texas, the 4th Texas, the 5th Texas, and the 3rd Arkansas on that bloody afternoon so I will not “reinvent the wheel” by describing their actions yet again.

This monument, with its wreath of yellow roses, commemorates the actions of the Texas brigade. 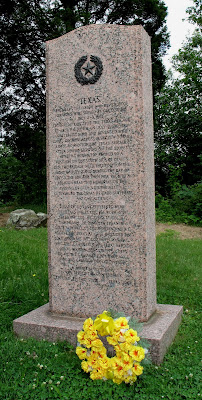 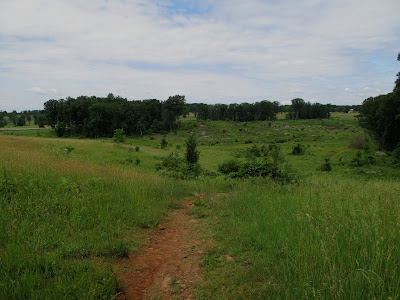 And a view of the triangular field from the perspective of the 1st ; the monument to the 124th is in the middle of the photograph. 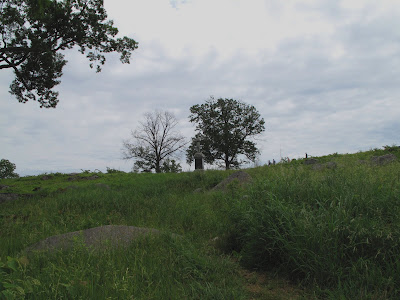 Posted by Jane Johansson at 7:55 PM