So many soldiers died during the Civil War that it is a bit difficult to comprehend the large scale of human suffering in that time period. Has anyone ever calculated the number of people directly affected by the deaths of soldiers during the war? It seems to me that a significant proportion of American families spent at least part of the war in mourning.

One-hundred and forty-six years ago today, Captain Theophilus Perry, the commander of Company F of the 28th Texas Cavalry (dismounted), was mortally wounded during the battle of Pleasant Hill, Louisiana. An attorney, 31 year old Perry’s survivors included a wife, a son, his father, his stepmother, a brother, five half sisters, and one half brother. His wife, Harriet, made her way back to her family home in at war’s end and eventually remarried.

This part of the casualty record for the 28th that appeared in the Galveston Weekly News on 10 May 1864 lists Theophilus Perry: 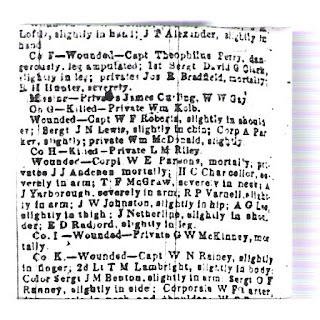 Such casualty lists were a regular, and dismal, feature of Civil War era newspapers. All too many families learned the truth of what Harriet Perry wrote in one of her letters: “war makes its widows by the thousand” (Harriet Perry to her sister Mary Temperance Person, 22 October 1862).

Posted by Jane Johansson at 7:25 PM